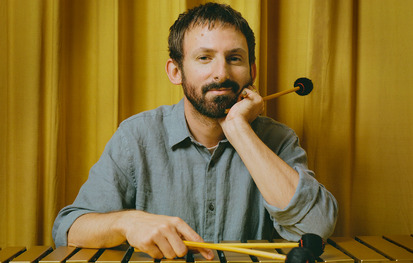 Vibraphonist, Chris Dingman, makes his BOP STOP debut with a solo appearance. Tickets to attend in person are $15 each. The show will also be livestreamed on BOP STOP's Facebook page at showtime. Accessing the stream is free but donations are encouraged and can be made at www.givebutter.com/Dingman

Chris Dingman is a vibraphonist and composer known for his distinctive approach to the instrument: sonically rich and expansive, bringing listeners on a journey to a beautiful, transcendent place.

Known for his significant work with legendary artists Herbie Hancock and Wayne Shorter as well as next generation visionaries such as Ambrose Akinmusire, Linda May Han Oh, Steve Lehman, Jen Shyu, and many others, Dingman casts an enveloping atmosphere in his captivating solo performances. With layers of sound – soaring melodies, swirling textures, and undulating pedal tones - it’s an immersive listening experience that many have described as transportive and deeply healing.

On his journey to becoming a solo artist, Chris documented his improvisations privately for many years, until his world changed. When his father entered hospice care in 2018, he created the 5-hour extended album Peace, recorded as he played it for his father, and ultimately released in 2020.

That profoundly emotional experience forced Dingman to re-examine the role that solo performing played in his life and career – imbuing it with an even deeper sense of mission and introspection. His stunning new album journeys vol. 1 features meditative and atmospheric pieces selected from more than a year of solo explorations.

Dingman has performed around the world including in India, Vietnam, and extensively throughout Europe and North America, and has received fellowships and grants from the Chamber Music America, the Doris Duke Foundation, New Music USA, and the Herbie Hancock Institute (formerly the Thelonious Monk Institute). He has been profiled by NPR, the New York Times, DRUM magazine and many other publications. He was nominated for Mallet Instrumentalist of the Year in the 2021 Jazz Journalist Association Awards, and has been named numerous times in the Downbeat and Jazz Times Critics polls. winning the Rising Star Vibraphonist award in 2012. He has released five critically acclaimed albums as a leader.

Hailed by the New York Times as a “dazzling” soloist and a composer with a “fondness for airtight logic and burnished lyricism,” his musical approach has earned him praise as “an extremely gifted composer, bandleader, and recording artist.” (Jon Weber, NPR).