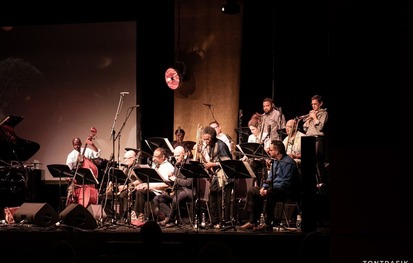 It is very rare that we get to present a touring large ensemble and we hope you will join us as The Makanda Project, a 13-piece group from Boston, makes their BOP STOP debut . Tickets to attend this concert in person are $15 each. This event will also be livestreamed on the BOP STOP's Facebook page at showtime. Accessing the stream is free but donations are much appreciated and can be made at www.givebutter.com/Makanda. We would like to thank Jazz Roads at South Arts for making this tour possible.

The Makanda Project was formed in 2005 to explore the previously unrecorded compositions of Makanda Ken McIntyre (1931-2001), a prolific, innovative, and unsung multi-instrumentalist, educator, and composer whose contributions to the development of jazz from the 1960s onward remain under-recognized. Upon Dr. McIntyre's passing, 350 unrecorded compositions were discovered - a significant body of work that would have remained unknown to the public without the Makanda Project's efforts. Leader/arranger/pianist John Kordalewski, a former McIntyre student, has arranged over 60 of these compositions for the large ensemble.

Because there is no record of Dr. McIntyre having performed these pieces, the Makanda Project differs from "tribute bands" whose performances can be compared to original recordings. Rather, the McIntyre compositions have been a vehicle for the group to develop its own sound and identity.

The Makanda Project has been an actively working large ensemble for over 15 years, a relative rarity in today's day and age. The group has achieved this largely by presenting self-produced free concerts in Boston's Roxbury neighborhood, throughout the year, and developed a strong local following as community-based artists. The group has also performed throughout the East Coast from Washington DC to Maine, and its first European performances, in 2021, were very well received. The April tour will be the group's first appearances in the Midwest.

The personnel on April 20: