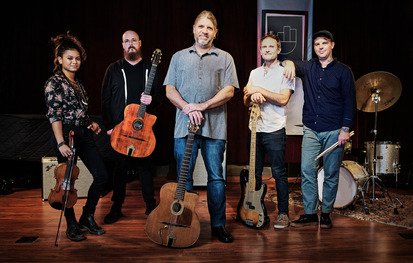 The living face of modern Gypsy jazz, Stephane Wrembel, brings his fabulous band to BOP STOP for two shows at 6pm & 8pm with special guest Daisy Castro on Violin. Be sure to purchase tickets to your desired showtime. This event will not be livestreamed so be sure to get your ticket soon!

Stephane Wrembel is one of the most highly regarded guitarists in the world specializing in the style of legendary composer/guitarist Django Reinhardt; he learned his craft among the Gypsies at campsites in the French countryside. He has had a remarkable career, touring the world, while releasing 16 albums under his name and the nom de plume, The Django Experiment. His original compositions have been featured in Woody Allen’s Vicki Cristina Barcelona (“Big Brother”) and Midnight in Paris (“Bistro Fada”). He recorded the entire score for Rifkin’s Festival (starring Wallace Shawn, Gina Gershon and Christophe Waltz) tentatively set to be released in late January of 2022. In October of 2019, Wrembel released the highly regarded Django L’Impressionniste, featuring 17 of Reinhardt’s preludes for solo guitar, followed by a book of his transcriptions in April of 2021. Since 2003, Wrembel has produced the Django a Gogo Festival, bringing together some of the finest musicians in the world to celebrate the Sinti guitar style to perform in prestigious venues such as Carnegie Hall and The Town Hall.

Wrembel’s latest release, The Django Experiment VI, was released in January in 2021. Please listen here. Listen to his amazing 2012 release, Origins, which includes his original composition “Bistro Fada,” the highlight track on the Grammy®-winning soundtrack for Midnight In Paris.

"Perhaps the most creative improviser in Gypsy jazz today, Mr. Wrembel plays the guitar with a rich and colorful lyricism." – New York Times

Daisy Castro is a unique and incredibly powerful voice in the violin world today. With roots firmly planted in the fiery passion of the Jazz Manouche tradition, her unique style refreshes and renews with a modern edge, global influence and instrumentation bridging the distance between Django Reinhardt’s generation and her own in a very exciting way helping to bring this beautiful music from the past into the future.