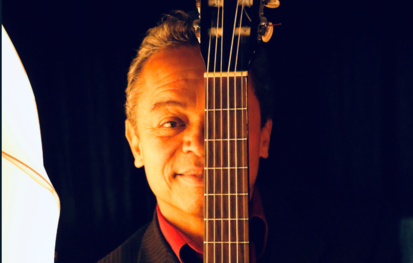 Tickets to attend in person are $20 each. The concert will also be livestreamed on BOP STOP's Facebook page at showtime. Accessing the livestream is free but donations are much appreciated and encouraged and can be made at www.givebutter.com/MoisesBorges

Moises Borges is a self taught acoustic-electric guitarist and singer born in Brazil. He grew up experimenting with rhythms such as bolero, baiao, xote, afoxe, frevo, forro, and especially Samba and Bossa Nova which are basic to his performances. Borges is dedicated to broadening the audience for Brazilian music by performing solo and with his band for the last 15 years and holds three nominations for the Brazilian International Press Awards USA as best Brazilian Instrumentalist living in the US.

Moises has performed at numerous countries, venues and events including the Rock and Roll Hall of Fame, Severance Hall & Cleveland Playhouse Square. In 2020 he was finalist on the BDOLive song festival, a nationwide original music contest scoring in fourth place.

Borges has become a prolific performer in the Northeast Ohio scene in recent years, a good storyteller, vivid and funny performer interpreting his original songs besides classics by Jobim, Gilberto, Bosco and many others. Far away from his native Brazil, the music of his homeland is very much alive when he is on stage.