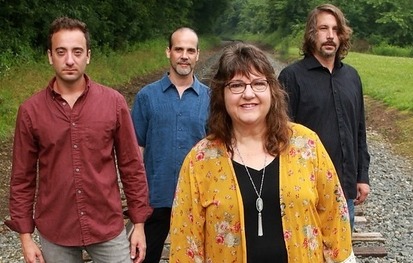 Get ready for a fun night of blues and soul as Becky Boyd & The Groove Train return to BOP STOP! Tickets to attend in person are $15 each. This event will also be livestreamed on BOP STOP's Facebook page at showtime. Accessing the stream is free but donations are greatly appreciated and can be made at www.givebutter.com/GrooveTrainBand

Becky Boyd has been playing the Cleveland club scene for 40+ years. Her vocals are outstanding, combining great tone, with tremendous feel. In addition to singing with many bands over the years, Becky has opened for such acclaimed artists as The Outlaws, Brownsville Station, Marshall Tucker Band, Fairport Convention, Buddy Miles, Robert Lockwood Jr., Billy Branch, Walter Trout, Chad & Jeremy and Todd Rundgren. A career highlight for Becky was singing backups for McKendree Spring at their reunion concert Memorial Day Weekend 2008 at the Beachland Ballroom in Cleveland Ohio.

Becky has been nominated several times as Best Vocalist & Best Female Vocalist in the Freetimes and Scene Magazine. Becky received the Best vocalist Award from the Cleveland Blues Society in 2018.

She has recorded two CDs with her previous band Real Life, as well as studio work with many Cleveland artists.

In 2010, Becky joined up with blues guitarist Tim Matson and competed in the Memphis Blues Challenge, sponsored by the Cleveland Blues Society. Taking first prize in the Cleveland solo/duo category, they won the chance to compete against over 100 acts at the International Blues Challenge in Memphis, Tennessee. Becky and Tim performed at the famous Orpheum Theatre and placed in the Top 8. They recorded a CD titled "Becky Boyd & Tim Matson.”