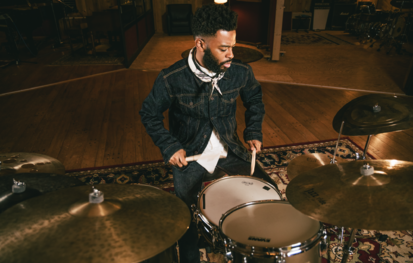 Jonathan Barber & Vision Ahead return to the BOP STOP for a highly anticipated concert! Tickets to attend this performance in person are $20 each. The show will also be livestreamed on BOP STOP's Facebook page at showtime. Accessing the stream is free but donations are encouraged and can be made at www.givebutter.com/JBarber

DownBeat magazine calls Vision Ahead’s self-titled debut album Barber’s “greatest accomplishment to date,” but make no mistake, this group is more than the Jonathan Barber Quintet; this is unmistakably “Vision Ahead,” a distinctive and close-knit group of musicians who have been working toward this moment for years. Featuring Godwin Louis on saxophone, Andrew Renfroe on guitar, Matt Dwonszyk on bass, and Taber Gable on piano, Vision Ahead offers a fresh blend of classic jazz with elements of gospel, rock, soul, and fusion that’s already attracting listeners across generations. Even when they’re playing hard—and they do reach some thrilling crescendos—this extremely dynamic band always feels impeccably sharp and in control, cool far beyond their years.

Barber also shows quite a gift for pacing in his new compositions, with each song boasting a real sense of progression that’s balanced with a proper spotlight on his bandmates’ noteworthy improvisations. Barber is the main composer but each member of the band contributes compositions and arrangements. With strong melodic motifs and almost every extended solo accompanied by new forms or themes, Barber’s music strikes the rare balance of maintaining a clear emotional through-line while still providing each soloist a fresh foundation on which to build.

Jonathan Barber & Vision Ahead has performed at The Jazz Standard, BMCC Tribeca Performing Arts Center, Scullers Jazz Club, Smalls Jazz Club, Dizzy’s Club Coca Cola, Rockwood Music Hall, Smoke Jazz Club, The Cell, Minton’s Playhouse, Black Eyed Sally’s, The Side Door and other notable music venues. In August of 2018 this band headlined the Rainy Days Festival held in St. Petersburg and Moscow, Russia. The name “Vision Ahead” holds deep personal significance to Barber, as suggested in the occasional lyrics throughout the debut record entitled Vision Ahead, but it’s immediately clear that this is the sound of now.