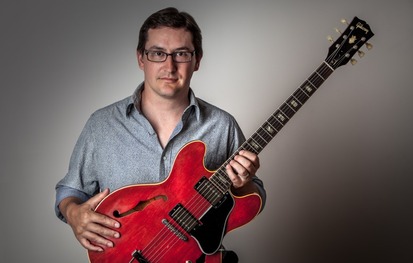 Dan Bruce Quartet performs at BOP STOP for a pop up performance prior to our jazz jam session which will begin at 10pm. This show is a replacement for the Hilario Duran concert which was originally booked at this time.

Tickets to attend this concert are $20 each. This event will also be livestreamed on BOP STOP's Facebook page at showtime. Accessing the stream is free but donations are encouraged and can be made at www.givebutter.com/DanBand

By embracing the influence of his heroes from the jazz tradition and retaining his own musical personality, guitarist Daniel Bruce has developed a unique and impressive musical voice. A recent transplant to Ohio after spending a decade as an important member of Chicago’s vibrant jazz scene, he is active throughout the Midwest and nationally as a performer, recording artist, composer and educator.

He has performed on more than thirty albums as a sideman and has released two albums under his own name. As a performer and recording artist, Bruce has had the opportunity to work with a number of eminent musicians including Seamus Blake, Ali Jackson, Dan Wall, Lynn Seaton, Rose Colella, The Cleveland Jazz Orchestra, and Marquis Hill.