A Free Musical Event for the Whole Family 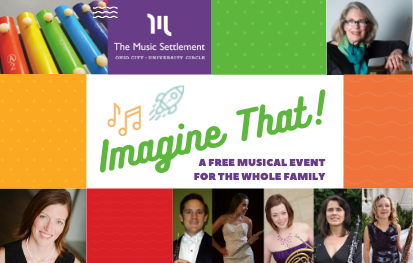 You could not, would not, want to miss a music party such as this!

Join us for a whimsical morning of musical fun from Cleveland composer Margaret Brouwer, featuring a premiere performance!

A Q&A with the composer and performers will follow.

The program is recommended for children in grades PreK - 4. This event is free and open to the public.

About Daniel and Snakeman

Daniel and Snakeman for woodwind quintet and storyteller is a musical story for children, K through 4th grade. Eleven year-old Daniel lives in a future time when most people have learned to live together peacefully, liking and respecting each other's differences. But there are still some hold-overs from the past like Snakeman, who does not like seeing people who are different from each other having fun together. Daniel finds and frees his friends who have been captured by Snakeman. The characters in the story are represented by different instruments - Daniel by the horn, Wiggy a talking bat by the clarinet, Fadumo by oboe, Elizabeth by flute, and Snakeman by bassoon.

"Music's power to unite is one of the key messages in Margaret Brouwer's Daniel and Snakeman, a disarming piece for listeners of all ages...Daniel abounds in charming tunes that help catapult Brouwer's story about the eponymous hero who faces nasty, intolerant Snakeman and releases the villain's underground population of people of many cultures." -Donald Rosenberg, The Plain Dealer, May 10, 2011

A fairytale filled with good versus evil, Daniel and Snakeman is told in a way that can be understood and respected by young and old. It is a true work of noble and kind innocence as expressed through Ms. Brouwer’s charismatic text and compositional ingenuity…. giving distinction to her characters with lush harmonies, beautiful melodies, jazzy licks…. - J.D. Goddard, www.clevelandclassical.com, May 11, 2011

About Green Eggs and Ham

A ‘merry, whiz-bang romp through the Dr Seuss classic’ that seamlessly incorporates sophisticated references to familiar classical and popular music with a timeless parable about prejudice. Kapilow’s crackerjack musical accompaniment to a psychological tug-of-war between a boy named Sam-I-Am and a character called the Grouch meets Dr. Seuss’s touching and funny tale about overcoming everyday prejudice.