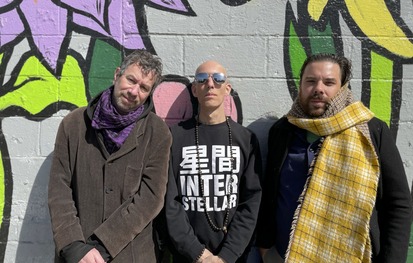 This show is sponsored by John & Pam Gibbon, Ken Horner, and Friends of The BOP STOP.

Cleveland bred avant-garde jazz trio, BIRTH, returns to BOP STOP! Tickets to attend this concert in person are $15 each. This event will also be livestreamed on BOP STOP's Facebook page at showtime. Accessing the stream is free but donations are encouraged and can be made at www.givebutter.com/BirthMusic

23 years ago, the genre melding avant-garde jazz trio, birth, formed in Cleveland, Ohio. After many years of performing, recording, and developing their sound into an expansive musical language, the band went on a long hiatus. When they returned to the fold, it was as though they dropped the needle on an ever spinning platter of their music, with the sound and playing every bit as clear, forward-thinking, and creatively relevant as it had been in their younger incarnation.

Their music has evolved from youthful, unrestrained, often "sensationalized" (in the words of Joe Maneri) displays of prodigious outbursts on their instruments, to later, a hybrid of powerful, yet highly sensitive improvisation and composition that garnered attention and praise from some of the leading voices of the avant-garde jazz and creative music world.

A favorite of Cleveland jazz writer and folk icon Harvey Pekar, their music lead Harvey to proclaim that birth was "So good that it's scary." "Awesome and magnificent" lauded The Wire. John Zorn wrote "The music is strong, as is the group." They were voted best Cleveland band of all time by the outgoing editors from the Cleveland Free Times in its final edition.