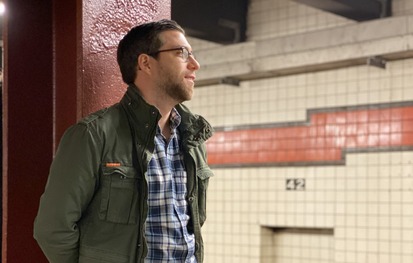 The long awaited BOP STOP debut of Steve Renko as a bandleader is finally here! After spending the past 20 years as a sideman, he is now leading a trio featuring his original compositions and well-known standards by Thelonious Monk, Miles Davis and Duke Ellington. Tickets to attend this concert in person are $15. This show will also be livestreamed on BOP STOP's Facebook page at showtime, Accessing the stream is free but donations are encouraged and can be made at www.givebutter.com/Renko

Renko is an award-winning drummer and percussionist. After his first professional engagements at the age of 9, Renko became a widely-sought drummer with Jazz, Rock, Blues, Afro-Cuban and Funk outfits in Cleveland and New York City. At age 12, he won National Runner Up at the Guitar Center Drum-Off and at age 15, he became the youngest full-time member of Ernie Krivda's Fat Tuesday Big Band. He has studied with world renowned musicians Matt Wilson, Bob McKee, Jamey Haddad and Johannes Weidenmüller. He has also studied composition and arranging with genre-defying pianist/conductor, Kirk Nurock. He received his Bachelor's Degree from the New School for Jazz in New York City.

As a busy sideman, Renko has opened up for Allan Holdsworth, Carl Palmer (Emerson, Lake and Palmer), Scott Henderson (Tribal Tech), Don Preston and Bunk Gardner (The Mothers of Invention) and many others. He has performed in venues around the country including Dizzy's Club in New York City, Bamboula's in New Orleans, The House of Blues in Chicago and the Fayetteville Roots Festival in Fayetteville, Arkansas. He also maintains an active studio recording schedule and has recorded numerous albums with acclaimed songwriters and producers in New York City; Cleveland, Ohio; Hartford, Connecticut; Buffalo, New York; and Detroit, Michigan.