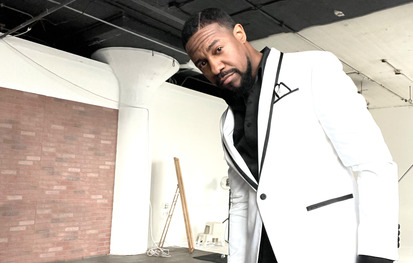 Alvin Frazier graces the BOP STOP stage to present an intimate concert as part of his RIVER album release tour. This show was rescheduled from 4/23/22. All ticket purchasers for the show on 4/23 were refunded and new tickets must be purchased for the June performance. Tickets to attend the concert on 6/17 in person are $20. This show will also be livestreamed on BOP STOP's Facebook page at showtime. Accessing the stream is free but donations are encouraged and can be made at www.givebutter.com/AlvinFrazier

Gifted and versatile are two words that best describe Cleveland-born singer, songwriter, musician, producer, composer & actor alvin frazier. A self-taught musician, alvin would go on to learn 5 instruments; piano, guitar, bass, drums and percussion. Often referred to as a triple-threat, the multifaceted artist has built a reputation for being a dynamic performer and entertainer who knows how to connect and win the hearts of his audience. His sultry and pure tenor voice has been compared to artists such as Eric Benet', Maxwell, Babyface, JOE, Tony Rich and Michael Jackson. He is also an amazing guitarist with comparisons to George Benson, Norman Brown and Earl Klugh.

He has released and produced 3 albums as a vocalist, “Love & Faith: Vol. 1” (2006) and “A Wonderful Love: Love & Faith Vol. 2” (2013) the latter, entered the UK Soul Chart at #27 peaking at #2 primarily on the strength of "Something to Remember" a soulful duet performed and written with Cassandra Stewart from that project. Both albums were also recognized as one of the Best R&B / Soul albums of 2007 & 2013 in Japan respectively. In 2021, alvin released his highly anticipated third album, “RIVER” to rave reviews. It's lead single "Lost in Love" is currently holding positions on 3 different charts for radio airplay internationally. As if all that wasn't enough, in the summer of 2021 alvin was asked to join legendary Motown Records Grammy Award Winning group the Dazz Band as their new bass guitarist and yes, he will be doing double-duty on vocals as well. The group is currently working on a new album due out this year.

Aside from being a recording artist, alvin is also an accomplished actor who has appeared in multiple film, television and theater productions. His most recent silver screen appearance was in the two-time Academy Award Winning Warner Brothers film "Judas & The Black Messiah". He also launched a clothing brand The alvin frazier Collection in 2016. To say that alvin frazier is one of “The Hardest Working Men in Show business” would be an understatement. He is the definition of a “true” entertainer / artist and has only scratched the surface of his capabilities. Stay tuned!

For additional information about this gifted artist & entertainer visit www.alvinfraziermusic.com