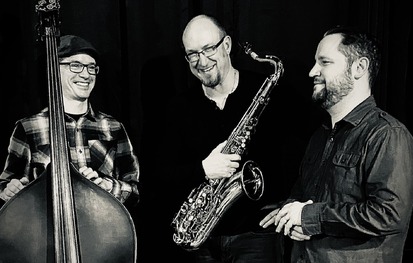 This performance t is made possible with the support of Jazz Road, a national initiative of South Arts, which is funded by the Doris Duke Charitable Foundation with additional support from the Andrew W. Mellon Foundation.

Sincerely, Linus makes their BOP STOP debut! Tickets to attend this concert in person are $15 each. This concert will also be livestreamed on BOP STOP's Facebook page at showtime. Accessing the stream is free but donations are encouraged and can be made at www.givebutter.com/SincerelyLinus

Sincerely, Linus is a modern music ensemble led by musician/educator/percussionist Jake Polancich. Informed by jazz, classical, rock, avant-garde, and electronics, the group balances original, covered, and improvised compositions with a nod to the past and an uninhibited exploration of the present. With Ryan Meisel on saxophones and Matt Rodgers on bass, each member brings a wealth of experience as visionaries and potent creative artists. Their first album Quarx was released in 2021.

Jake Polancich: A musician and educator based in the Milwaukee area, Jake Polancich is the Director of Bands and Music Department Teacher Leader at Arrowhead High School (Hartland, WI) where he oversees all aspects of the program including 4 concert bands, 2 jazz ensembles, marching band, percussion ensemble, and teaches Music Theory. As a drummer and percussionist, his most recent projects include performance/recording dates with the Ryan Meisel QuArtet, Montauk Project, and his newest project Sincerely, Linus. He has performed and recorded with numerous bands and ensembles throughout the United States, Canada, England, Ireland, Italy, and the Republic of China. He continues to serve as a performer, conductor, presenter and adjudicator for various festivals and concerts. Jake is a proud endorser of DREAM Cymbals and Pork Pie Drums. For more information, follow Jake on Twitter @jpolancich or visit www.jpomusic.com

Ryan Meisel: Ryan Meisel is an up-and-coming lion of Wisconsin jazzmen who performs at the best jazz festivals and venues in the area. Ryan’s group features music from his prolific compositional pen inspired by many great jazzmen including Chicago’s Fred Anderson and Von Freeman as well as classic John Coltrane, Joe Henderson and Dexter Gordon!
Ryan is a musician, educator, and composer. Ryan grew up outside of Milwaukee and honed his jazz skills under the tutelage of legendary bassist Richard Davis at the UW Madison and master jazz educators Ron Carter and Rodrigo Villanueva at Northern Illinois University. Ryan has frequented the many jam sessions in Chicago, Madison and Milwaukee and currently imparts that knowledge to his students as a teacher in the public schools. He strives to share music that is original, unifying among musicians, and uplifting for audiences. For more information, visit www.meiselmusic.net

Matt Rodgers: Matt Rodgers is one of those bassists that has the ability to play any style of music you throw at him, and his versatility has led him to play with more groups than can be named here. Rock & Pop, Jazz & Gypsy swing, to Latin & Afro-Pop, he has played them all. Having personally received instruction from Jazz legend Richard Davis, Rodgers can move easily from playing funk grooves on his electric bass, to thumping out mellow lines on the upright.