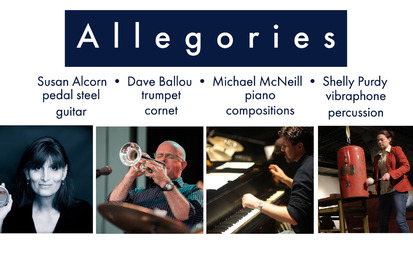 New Ghosts and BOP STOP have partnered to bring you Allegories!

Allegories puts pedal steal guitar innovator Susan Alcorn, trumpet virtuoso Dave Balloue, and exploratory percussionist Shelly Purdy in the context of Michael McNeill's rich piano harmonies and dynamic compositions. Stretching out over grooves and across soundscapes, and even stopping along the way to deconstruct the odd standard, the quartet brings together the platers' diverse experiences and broad imaginations into a heady and visceral brew.

One of the world’s premiere exponents of her instrument, Susan Alcorn has taken the pedal steel guitar far beyond its traditional role in country music. Having first paid her dues in Texas country & western bands, she began to expand the vocabulary of her instrument through her study of 20th century classical music, visionary jazz, and world musics.

In 2016, she was voted "Best Other Instrument" by the International Critics Poll. In 2017 she received the Baker Artist Award, and in 2018, along with saxophonist Joe McPhee, she was the recipient of the Instant Award in Improvised Music.

The UK Guardian writes, “As an improvisor and composer, Alcorn has proven to be visionary. Her pieces reveal the complexity of her instrument and her musical experience while never straying from a very direct, intense, and personal musical expression.”

of Journey into Jazz with the Boston Modern Orchestra Project, and as a featured soloist for the world premiere of Schuller’s Encounters.

Seeking a community in which he could grow as an artist and be surrounded by like- minded musicians, Ballou settled in Brooklyn in 1994 and took part in the vibrant scene there. In NY he played Broadway shows, recording sessions and many jazz concerts with some of his heroes: Joe Lovano, Sheila Jordan, Tim Berne, Billy Hart, Dewey Redman, Michael Formanek and Dave Liebman.

Ballou continues to perform with innovative improvisors and composers. Recently appearing with on recordings by Denman Maroney, Mario Pavone and Grammy nominated John Hollenbeck Large Ensemble, he continues to develop as an instrumentalist, composer and teacher.

Michael McNeill is a pianist, improviser, and composer from Western New York, currently living in eastern Virginia. He’s involved in projects ranging from reinterpretations of music by Thelonious Monk (on the album Refractions with drummer John Bacon) to the chambercore quartet The Evolution of the Arm, which “nearly forge[s] an entirely new subgenre of sounds” (TakeEffect). His two CDs with bassist Ken Filiano and drummer Phil Haynes have drawn praise from critics in the US and abroad, who note that the band’s music is “brimming with intelligence and passion” (AllAboutJazz.com), and that the trio “has much to offer not only to jazz or classical music, but music as a whole” (Music On The Run, Brazil). Current projects include an album of telepathic improvisations with The Evolution of the Arm, sideperson appearances in drummer Scott Clark’s new Dawn & Dusk, and solo electronic music.

Shelly Purdy is a contemporary percussionist and teaching artist from Maryland, where she has for the past decade been committed to presenting new and experimental music. Her sonic explorations tend to favor the mingling of found objects with more traditional instruments and an affinity for chance and silence whenever possible. Purdy’s adventurous nature connects her with exceptional project partners, such as powerhouse Baltimore improvisers’ Tom Goldstein, Paul Neidhart, and Will Redman in their percussion quartet Umbilicus. She is also a founding member of the science/music ensemble The Inverse Square Trio with boisterous edu- tainer Bill Louden where they demonstrate acoustic properties and aural illusions through the works of Alvin Lucier, Steve Reich, Diana Deutsch, Richard Feynman and others.Both groups inspire sonic discovery by commissioning new works, often composing for ourselves, and genuinely ‘experimenting’ in the processes and phenomenon of perpetuating sound. Purdy also has been studying Javanese & Balinese Gamelan under the tutelage of Prof Gina Beck and has been a member of The High Zero Foundation and Red Room Collective since 2016. Among her recent recording releases is the duo tape Six Improvisations for Two Vibraphones with Will Redman on 20/20 Records.