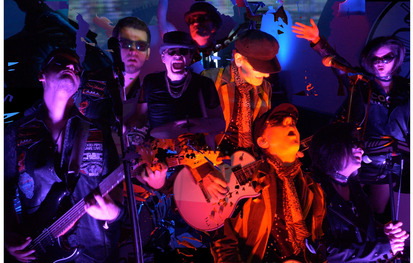 Vanity Crash has been lighting the glam rock torch for almost two decades, proving to be one of the finest of the genre. In conjunction with their upcoming 6th release, Vanity Crash will be bringing their fans behind the scenes and offering insights into the songwriting, inspirations, recording and final production of many of the songs on the recording. This will happen alongside of their live performance on Saturday, June 25 at the BOP STOP in Cleveland. Audience members will be able to ask questions of Vanity Crash to reveal their deep-down secrets.

Each ticket buyer will receive a free download of a song of their choice. In addition, fans will have a chance to purchase an NFT (non-fungible token) of a collection of three songs of their choosing performed live that night. These collections will be one-of-a-kind, with a certificate of ownership signed by Vanity Crash.

New merchandise will be available, including for the first time a Vanity Crash metal lunch box. Now how cool is that! Show starts at 8:00PM, doors at 7:30PM.

Vanity Crash was born on stage under hot lights in the crucible of sound and fury as the glam-punk band The Angry Inch in the rock musical Hedwig and the Angry Inch. Ever since, Vanity Crash has been dressing up and throwing down eyepopping synchronized light shows, outrageous stage costumes and provocative attitude, playing with the likes of the New York Dolls, Poison, Semi Precious Weapons, the Darkness, and Gogol Bordello.