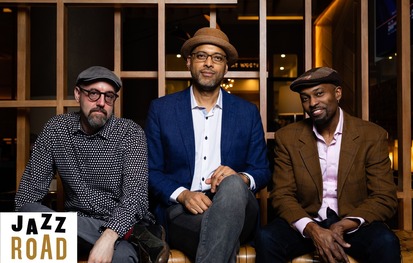 Andy Milne and UNISON return to the BOP STOP to present their latest original material. Tickets to attend this concert in person are $20 each. This show will also be livestreamed on BOP STOP's Facebook page at showtime. Accessing the stream is free but donations are encouraged and can be made at www.givebutter.com/AndyMilne

For 30 years, award-winning pianist/composer Andy Milne has demonstrated boundless versatility, collaborating with dancers, visual artists, poets and musicians spanning jazz, classical, pop, folk, and world music. With UNISON, enriched with creative insights from his multiple projects, Milne returns to his first love, exploring the intimacy of the piano trio. The synchronistic relationship Milne has enjoyed with bassist John Hébert since 2010 is matchlessly rounded out with drummer Clarence Penn, who represents complimentary threads within the fabric of Milne’s piano trio philosophy -- the intersection of texture and groove. Their 2020 debut recording, “The reMission”, released on Sunnyside Records won them 2021 JUNO Award for Jazz Album of the Year: Group. The recording also received widespread media praise.

A former student of Oscar Peterson, Milne has collaborated with a range of artists including Ralph Alessi, Ravi Coltrane, Andrew Cyrille, Sekou Sundiata, Avery Brooks, Bruce Cockburn, Fred Hersch, Ben Monder, Dianne Reeves and Cassandra Wilson. He has composed, performed and produced scores for seven films by acclaimed actor/director William Shatner and is a distinct and respected voice at the heart of New York’s creative jazz scene. Early in his career, Milne was at the center of the M-BASE Collective as a core member of saxophonist Steve Coleman’s bands during the 1990s. He is a Yamaha Artist and sought-after educator, serving as an assistant professor of music at The University of Michigan and the AssistantDirector at The School for Improvisational Music.

John Hébert, originally from New Orleans, has been a highly sought-after New York bassist since the mid-1990s. A former student of Rufus Reid, Hébert has collaborated extensively with pianists Fred Hersch and Andrew Hill, appearing on celebrated recordings from each pianist. He has also performed with Lee Konitz, Paul Bley, John Abercrombie, Kenny Wheeler, Paul Motian, Uri Caine, Bill Stewart, Mary Halvorson, Tomasz Stanko, David Liebman, and Toots Thielemans, among many others. An accomplished bandleader, Hébert’s 2015 Sunnyside release with his quartet Rambling Confessions -- his quartet featuring Milne -- received critical acclaim, including 4.5 stars from Downbeat. Over the past decade, he has been named multiple times as a “Rising Star Acoustic Bassist” in Downbeat’s Critics Poll and has received multiple Grammy nominations. Hebert is a full-time professor of bass at Western Michigan University.

Clarence Penn is one of the most in demand jazz drummers in the world. A composer, bandleader, and prolific producer, he performs regularly with Maria Schneider, Dave Douglas and Uri Caine. Since 1991 when he arrived in New York City, Penn has placed his unique blend of mega-chops, keen intellect, and heady musicianship at the service of a staggering array of A-list artists including Ellis and Wynton Marsalis, Betty Carter, Stanley Clarke, Steps Ahead, Makoto Ozone and Michael Brecker. His impressive discography includes several hundred studio albums, including Grammy-winning recordings from Randy Brecker and Maria Schneider, representing a 360-degree spectrum of jazz expression. He has toured extensively throughout the United States, the Americas, Europe, Japan, and Southeast Asia. He’s composed music for films and commercials, and produced tracks for numerous singers in the pop and alternative arenas. Whether leading his own band or performing as a sideman, Penn brings unfailing versatility, professionalism, and an ability to find creative ways to interpret a global array of styles and idioms.