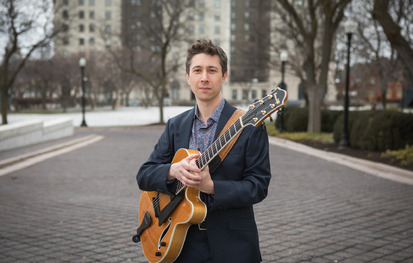 National recording guitarist, Randy Napoleon, returns to the BOP STOP with his all-star trio for an engaging evening of jazz. Tickets to attend this show in person are $20 each. This concert will also be livestreamed on BOP STOP's Facebook page at showtime. Accessing the stream is free but donations are encouraged and appreciated and can be made at www.givebutter.com/RandyNapoleon

Napoleon has performed or arranged on over seventy records including the Grammy-nominated releases, Freddy Cole Sings Mr. B and My Mood Is You. He performed on The Clayton Hamilton Orchestra: Live at MCG. Napoleon is featured on Buble’s Grammy-nominated CD/DVD Caught in the Act.

Television credits include The Tonight Show, Late Night With David Letterman, The View, and the Today Show and live performances span the globe including Royal Albert Hall, The Sydney Opera House, The Hollywood Bowl, and Lincoln Center.