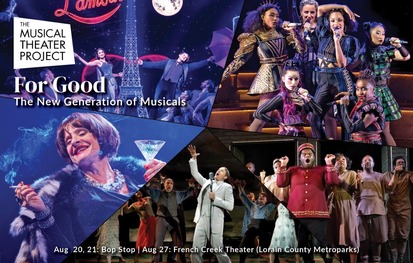 Back by popular demand, The Music Theater Project returns to BOP STOP to present "For Good: The New Generation of Musicals, Vol. 5".

Current Broadway musicals have awakened audiences to new possibilities for America’s great art form. In August, FOR GOOD brings you terrific songs from—and commentary on—some of the most recent shows, plus others sampling the past 25 years. It’s a multi-media survey of contemporary musical theater, offering a fascinating guide from where we’ve been…to where we are headed. And it’s the fifth-annual edition of this popular concert—with all-new songs!—hosted by NANCY MAIER and SHERI GROSS, and featuring singers ERIC FANCHER and JESSICA COPE MILLER. Included is a special tribute to Stephen Sondheim.

It's the fifth-annual go-round for The Musical Theater Project's knockout series celebrating where the American musical is right now (and going back to just 25 years). The creativity is astonishing and includes such current hits as Moulin Rouge, Girl From the North Country and the Pulitzer Prize- and Tony Award-winning The Strange Loop.

Tickets for this show are $35 and go on sale 7/1. Tickets can be purchased here.