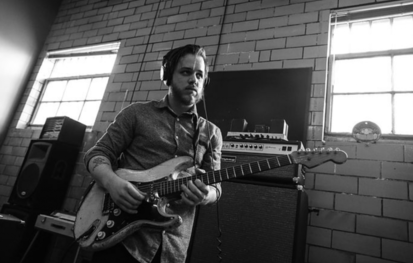 Guitarist, Charlie Ballantine, returns to BOP STOP for a highly anticipated concert! Tickets to attend this show in person are $15. This event will also be livestreamed on BOP STOP's Facebook page at showtime. Accessing the stream is free but donations are encouraged and can be made at www.givebutter.com/CharlieBallantine

Charlie Ballantine is acclaimed as one of the finest and most versatile young guitarists on the scene today. JAZZ TIMES MAGAZINE hails his playing as “teeming with intricate grooves and maniacal precision his guitar work is both beautiful and complex” and VINTAGE GUITAR MAGAZINE described his style by stating “Jazz, rock, and folk music peacefully coexist in Charlie Ballantine’s world”.

Equipped with an impressive body of original compositions on albums like “Vonnegut” and “Cold Coffee”, Ballantine also displays a great reverence for the jazz tradition through the inclusion of standards like ‘My One and Only Love’, ‘East of the Sun’ and an entire double album dedicated to the music of Thelonious Monk released September 2021. “In the vein of fellow guitarists like John Scofield, Bill Frisell and Julian Lage, Ballantine reconciles his educational background in jazz with the stylistic background of his instrument. He approaches the gratifying tonal and harmonic language of rock/roots with the groove, ambition and improvisational focus of a jazz musician” - (JAZZIZ MAGAZINE)

After graduating from the Jacobs School of Music under the direction of David Baker, Ballantine relocated to Indianapolis and quickly developed a name for himself with a string of high energy performances at clubs like the Jazz Kitchen and Chatterbox Jazz Club. After releasing two solo albums Ballantine was able to attain global recognition with his award winning third album “Life is Brief: The Music of Bob Dylan” which ALL ABOUT JAZZ named in their top ten jazz albums of the year. “From the opening bars of "The Times They Are a-Changin'" it is clear that something special is happening” - (ALL ABOUT JAZZ)

Although primarily a front man for his own projects with tours and frequent appearances throughout the US and Canada at venues and festivals such as the Indianapolis Jazz Festival, The Winnipeg International Jazz Festival and The Elkhart Jazz Festival, Ballantine also has an extensive list of side man credits having performed with names like Rob Dixon, Emmett Cohen, and Amanda Gardier helping to further solidify him as a creative force and put him in the highest of ranks as a performer.