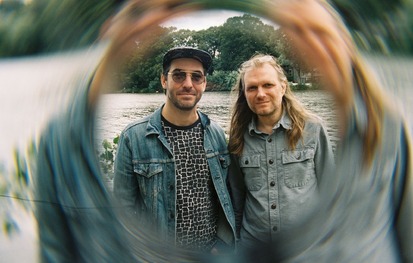 New Ghosts and BOP STOP have partnered to bring Grassy Sound to Cleveland! Tickets to attend this show are $20 each. This show will also be livestreamed on BOP STOP's Facebook page at showtime. Accessing the stream is free but donations are encouraged and can be made at www.givebutter.com/GrassySound

Grassy Sound is the duo of guitarist Nick Millevoi—who leads Desertion Trio and has worked with John Zorn, Nels Cline, and Chris Forsyth—and keyboard wiz Ron Stabinsky (Mostly Other People Do the Killing, Meat Puppets). Together, they pair gritty electric-guitar lyricism and Hammond B-3 swirl to delve into the sounds of midcentury surf and exotica inspired by the melodic and rhythmic weirdness of Captain Beefheart and Thelonious Monk. The Sounds of Grassy Sound, their debut as a duo, will be released digitally and on vinyl via Destiny Records on July 8, 2022. The album includes special guest appearances from the original Meat Puppets lineup of brothers Curt and Cris Kirkwood and Derrick Bostrom.