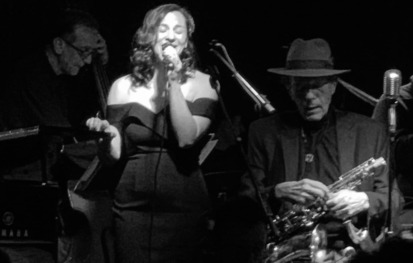 Cleveland's own, Ernie Krivda, swings into the BOP STOP with his quartet for a special concert and livestream. Special guest vocalist, Erin Keckan, will be featured throughout the evening. Tickets to attend in this concert in person are $20 each. To access the stream, visit BOP STOP's Facebook page at showtime. Accessing the stream is free but donations are encouraged and appreciated. They can be made here: https://givebutter.com/krivdaQuartet

“No doubt about it, Ernie Krivda is one of the originals of the tenor saxophone” wrote Bill Donaldson for Cadence Magazine about the legendary jazz musician whose 6th decade on the music scene is already filled with a variety of accomplishment. The tenor saxophonist is regarded by critics such as the late Harvey Pekar as "one of the best jazz tenor men in the world". The composer has written countless compositions in multiple genres. The recording artist has well over thirty albums released on a number of record labels with more on the way. The teacher has former students performing and recording all over the world.

In 2009 Ernie Krivda received the Cleveland Arts Prize award for lifetime achievement in music and the lifetime of achievement continues. Krivda who has recently won the Jazz Legends award from Cleveland's Tri-C jazz Festival and a CPAC (Community Partnership of Arts and Culture) Fellowship worth twenty thousand dollars, continues with great energy and passion career that spans over 50 years.

The journey in music that began under his musician father Lou's influence from almost birth to his tutelage at age 6 has taken him from polka bands in his early teens, classes at The Cleveland Institute of Music, the bands of Cleveland greats Eddie Bachus and Bill DeArango in the jazz clubs of Cleveland, to a life in music that includes the mentorship of Cannonball Adderley, tours with Quincy Jones, performances with musicians such as Ell Fitzgerald, Phil Woods, Sarah Vaughn, Buddy DeFranco, Groove Holmes, Terry Gibbs, John Faddis, The Dizzy Gillespie Orchestra, David Sanborn, Jackie Wilson and concerts with his own groups at Jazz Clubs and Festivals all over the world.

The musical journey goes on with a new recording for Capri Records, "A Bright and Shining Moment," released in June 2018 and touring that will give audiences an opportunity to hear "The sound that sets him apart" (Applegate Music Review), and the musician that the venerable Jazz Journal (of the UK) calls "both classic and brand new" .........The Legend Continues....!