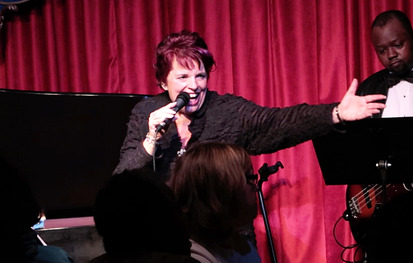 Vocalist, Debbie Darling, makes her BOP STOP debut! She has created a fantastic band for this special occasion. Tickets to attend this show in person are $20 each. This concert will also be livestreamed on BOP STOP's Facebook page at showtime. Accessing the stream is free but donations are appreciated and can be made at www.givebutter.com/DebbieDarling

Debbie Darling is a singer/songwriter who has performed a wide range of musical styles. She studied voice under David Blair McCloskey, (vocal coach for the Metropolitan Opera). As a member of Little Flags Theater Company, she worked closely with Obie Award winner Maxine Klein. She’s provided her vocal talents for small bands, large orchestras and commercial voice overs. She's sung with Stanley Turrentine, The Peter Duchin Band, The Tommy Dorsey Band, and more. She was the national spokesperson for Catherine’s Plus Sizes and has been on radio and TV across the country including The Richard Simmons Show, Hard Copy and The Oprah Winfrey Show. She has authored five books and has sung up and down the Eastern sea coast. Her musical collaboration with David Strieter began in 2017. Together they perform all over Northeast Ohio. They also deliver informative musical talks on a variety of topics from Frank Sinatra, to The Black Women of Jazz to The Women of the British Invasion and much more.

Ed Ridley is a phenomenal piano player who is no stranger to the Bop Stop. He has performed in the room a myriad of times. He is a “musical linguist” in Jazz, Gospel, Classical, Latin, and R&B styles. Over the past 30 years theaters, jazz clubs, church sanctuaries, concert halls, radio and television stations all over the world have all been ignited by the Ridley Touch. Ed is not only a brilliant musician he is also a talented composer and arranger as well as a gifted teacher. This will be the second project that Ed and Debbie have collaborated on together.

Doug Harvey is a musician/composer who took up music in 1964. In junior high school, he played in a four-piece band featuring popular songs of the day and graduated to a seven-piece soul band during high school. While attending Harvard College, he co-led a popular college mixer dance band that performed throughout New England. After college, he moved to Durham, NC, where he played in a band with a vintage swing and jump repertoire, a jazz bebop trio, and a noted regional banjo player. His musician activities took a backseat to his music business career when he became a buyer for a regional record store chain in 1978. He moved to Cleveland in 1992 to work as CEO of Sandusky Distributing Company. He started playing live again in 2012, playing regularly with a blues band, an R&B band, and a jazz trio. He has written songs and produced recordings with a catalog of over 200 titles.

James Alexander II is a jazz drummer and a Cleveland native. He is a performer, composer, producer and educator. He acquired his Bachelor of Music in Jazz Studies from The Oberlin Conservatory of Music and completed the Master of Arts in Jazz Studies from Queens College in New York City. As a national artist he enjoys all music. He has opened for Cameo, Melba Moore, Freddie Jackson, Melissa Morgan, Stephanie Mills, Jeffrey Osborne, New Edition and many others. James has led jazz ensembles in NYC venues along with dates in Cleveland venues. He was the opening act for the legendary Jennifer Holiday at the MGM Grand in Cleveland.