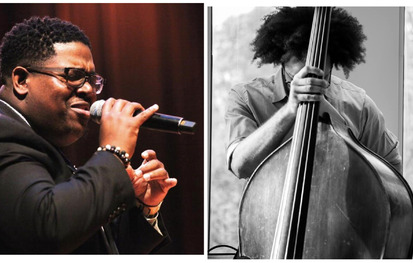 Cleveland-native and vocalist extraordinaire, Reggie Bowens, makes a highly anticipated return to the BOP STOP stage performing alongside bassist, Jordan McBride. Tickets to attend this show in person are $15. In addition, this concert will be livestreamed on the BOP STOP's Facebook page at showtime. Accessing the stream is free but donations to support the band are encouraged and can be made at www.givebutter.com/ReggieBowens

Reggie’s gifted art has wrought him an exceptional background over the years, working with accomplished artists such as Bobby McFerrin, Smokey Robinson, Kenny Loggins, and Kim Nazarian, to name a few. After completion of his undergraduate degree program at Washington, D.C.’s Howard University in 2011, he appeared on season three of NBC’s hit a cappella television show “The Sing-Off” as a vocal bass contestant and arranger with Afro-Blue (now Traces of Blue). The group placed fourth out of sixteen a cappella groups from across the globe.

After receiving his master of music degree from the Jacobs School of Music at Indiana University, Reggie became a faculty member of the Jazz Studies program at Tri-C where he currently teaches voice and piano. He has worked with iconic musical artists performing multiple genres, and proving that music is a universal language in which he is fluent.

He is currently a doctoral scholar in the Jazz Studies and Contemporary Media program at the Eastman School of Music (Rochester, NY). He does not know what the future holds, but through his faith and genuine love of the art, he plans to actualize his destiny.