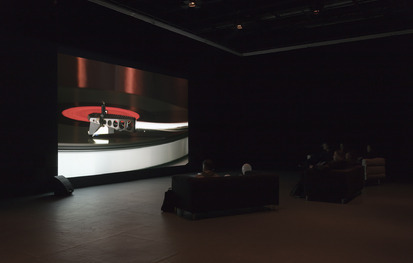 FRONT International Presents Martin Beck At BOP STOP for a three day residency during the closing weekend of the festival 9/30-10/2! These screenings are FREE to attend!

How can a reconstruction of the past evoke community and joy?

BOP STOP plays a prominent role during closing weekend of the 2022 FRONT International: Cleveland Triennial for Contemporary Art, Oh, Gods of Dust and Rainbows, as the setting for an immersive, long-form film by Austrian-born artist Martin Beck.

Last Night is a film showing 13½ hours of records as they are played on a vintage Thorens turntable. Despite its strict shot sequence and cool effect, the film evokes resonances of joy through the music being played. It represents one part of Beck’s extended project, Last Night, which consists of multiple, interconnected artworks that all revolve around a singular, ephemeral event: the last party that David Mancuso threw at the Loft’s 99 Prince Street location on June 2, 1984. Through painstaking research based on an archival recording, Beck identified and sequenced the 118 songs played at that final party.

In the words of the artist, “Last Night is a poetic construction, as much a private experience as it is memory of something that actually happened: a construction that speaks of history and love, of pleasure and time.” The project points to the ways in which the essential human form of music can bring different people together into new communities.

Launched in 2018, FRONT International: Cleveland Triennial for Contemporary Art is a free, public, contemporary art exhibition comprising artist commissions, performances, films, and public programs. The inaugural edition brought over 90,000 visitors from more than 25 countries and generated $31 million in economic impact in the region. Oh, Gods of Dust and Rainbows, the second iteration of FRONT International will run from July 16 through October 2, 2022. More than 90 world-renowned artists, including many from this region, will exhibit their work at 30 sites across Cleveland, Akron, and Oberlin. Building on the success of the first edition, FRONT 2022 furthers the Triennial’s commitment to the belief that by supporting creative communities and stimulating new cultural encounters in the region, contemporary art can be an important catalyst for positive social change.