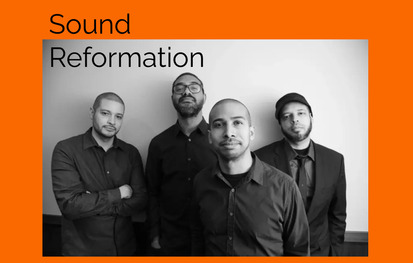 Tickets to attend this show in person are $20 each. This event will also be livesetreamed on BOP STOP's Facebook page at showtime. Accessing the stream is free but donations are encouraged and can be made at www.givebutter.com/SoundReformation

Critically acclaimed saxophonist Darryl Yokley has been recognized as a very talented composer and arranger by The New York Times, Downbeat Magazine, and more for writing unforgettable tunes for his band Sound Reformation, which released their second album Pictures at an African Exhibition in April of 2018. Yokley and Sound Reformation have performed as headliners in the Kennedy Center, The Paul Brown Monday night series, Salsa meets Jazz Festival, The Philadelphia Museum of Art, and many jazz venues all over the country. The son of an African-American father and a first generation Mexican mother, he relishes his diverse background and has developed a love for learning about and embracing the myriad of cultures around the world. Jazz critic Brent Black described Yokley's playing by saying “Yokley is a critic’s worst nightmare as he side steps standard categorization with ease" and Dave Cantor of Downbeat Magazine said of his recent release Pictures at an African Exhibition that the young saxophonist was "nakedly shuttling emotion through his instrument." However his music and playing are described, the consensus is that Darryl Yokley is an artist with a unique concept and a sound like no one else.

Darryl began his musical studies in his native state of California, starting at the age of ten on clarinet and moving to saxophone a year later upon entering middle school. He took quickly to the saxophone and the language of music, placing in honors bands for both classical and jazz. Yokley moved to North Carolina in high school and met his future saxophone professor James Houlik at a clinic in Lenoir, NC. It was in 1997 Yokley decided to focus solely on classical saxophone and it would be ten years before he would truly dedicate himself to jazz. He attended Duquesne University for his undergraduate studies and Michigan State University for graduate studies. He studied with the aforementioned James Houlik and later with concert alto saxophonist Joseph Lulloff in Michigan. While Yokley dabbled in jazz studies with Mike Tomaro at Duquesne and Derrick Gardner and Michigan State, the majority of his time and focus was towards being a concert soloist.

After graduating Michigan State University, Darryl started playing and touring with Motown legends the Four Tops, the Temptations, and the O Jays. Yokley was enjoying his time playing with the legendary musicians, but had a desire to swing again and he felt he finally had the time to dedicate himself to jazz and uphold the tradition of learning the music in the streets from older musicians. He moved to Philadelphia in 2007 to complete his “doctoral studies” from mentors such as Tim Warfield, Orrin Evans, Mike Boone, Sid Simmons, Mickey Roker, Edgar Bateman, and Byron Landham playing gigs in Philadelphia and frequenting the jam sessions almost every night. He moved to New York in 2009 and within less than a year he started performing main shows as a leader at a variety of venues and has performed with such artists as Orrin Evans, the Captain Black Big Band, Nasheet Waits, Valery Pomonarev’s Big Band “Our Father who Art Blakey”, Eddie Allen, Jack Walrath, Ralph Peterson, Frank Lacy, Duane Eubanks, Camille Gainer Jones III, Bill McHenry, and others. Yokley has performed for world-renowned musician and producer Quincy Jones as well as being the special guest artist for the closing ceremony for the ARPA International Film Festival in Hollywood 2014. In 2015 he was commissioned to write music for the Philadelphia Museum of Arts exhibition Represent: 200 years of African-American Art. His success as a bandleader and sideman has lead him around the U.S. as well as international performances. In addition to performing with some of the best names in jazz and Motown, Darryl also performed with Rhonda Ross for two years where he served as saxophonist and arranger in addition to recording with the singer songwriter. He also still maintains an active career as a classical soloist and chamber musician.

Yokley formed his band Sound Reformation back in 2010 and they released their debut album The Void in 2012, which received favorable reviews from such critics as Brent Black and Charles Latimer. The band’s popularity continues to grow with the recent release of his second album, Pictures at an African Exhibition, which was released on April 20th, 2018 and has received numerous accolades including the New York Times, Downbeat magazine, All About Jazz, Top 10 jazz album on Band Camp, Occhi Magazine, Black Grooves, and more. Since then Yokley has lead numerous tours with his band performing the music from this project as well as music from some other new projects on the horizon!

Alongside having a very busy performance and composing career Darryl Yokley is an active educator teaching saxophone, flute, and clarinet at the Fort Lee School of Music as well as being an active clinician. Darryl recently retired from Westminster conservatory in 2018 after eleven years of teaching there. During his time there he founded the Westminster Saxophone Quartet back in 2011 and has mentored young talented saxophonists, helping them develop their skills as young musicians and coaching a saxophone quartet to two first place finishes in competition at Carnegie Hall.