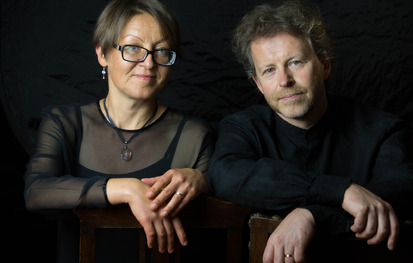 The Music Settlement (TMS) will present Debussy and Čiurlionis: Resounding Sea of Colour, performed by Duo Zubovas, husband-wife, dynamic Lithuanian piano duo Sonata Zubovien and Rokas Zubovas. This performance will showcase the famous Lithuanian composer, Mikalojus Konstantinas Čiurlionis (1875 – 1911), a true Renaissance man who is considered one of the pioneers of abstract art, as well as influential French composer, Claude Debussy (1862 – 1918). The Music Settlement will host the event on Wednesday, October 19th from 6:00 – 7:30pm in its Glick Recital Hall.

The program Resounding Sea of Colour unites two symphonic masterpieces from the early twentieth century adapted for one piano four hands. Claude Debussy and M.K. Čiurlionis both started composing their majestic marinist opuses independently in the same year, 1903. Debussy completed The Three Sketches for the Symphony Orchestra, La Mer, in 1905. The work was performed in Paris, but without much success as the language of the work was too modern for the listener. In order to make the work accessible to a wider audience, the composer also prepared and published an adaptation of the work for one piano four hands in 1905. Čiurlionis completed his monumental symphonic poem “The Sea” in 1907, but the work was performed only in 1936, twenty-five years after his death.

Resounding Sea of Colour is a must-see concert that will bring together a wide audience to hear Duo Zubovas. Born and raised in Lithuania, Sonata and Rokas studied at the M.K. Čiurlionis National School of Arts in Vilnius, garnering prizes in several national and international competitions. Duo Zubovas, who officially formed in 1997, has toured throughout North America, Europe and Asia presenting world premieres of ten new works.

Founded at the peak of the Settlement Movement, TMS’s initial mission was to help ease the transition of immigrants into the community. Using music and the arts as a universal language, immigrants could share their knowledge and culture as they adapted to Cleveland life. Throughout our 110-year history, many immensely gifted Lithuanian musicians and composers have studied and taught at TMS, including concert pianist, Andrius Kuprevičius, who settled with his family in Cleveland in the 1950s and was the Artist-in-Residence at TMS for several years before he was named a Professor of Piano at Cleveland State University.

Many immensely gifted Lithuanian musicians and composers have studied or taught at TMS. Pianist Andrius Kuprevičius settled with his family in Cleveland in the 1950s and was the Artist-in-Residence at TMS for several years before he was named a Professor of Piano at Cleveland State University. In addition, Birute Smetona and Jonas Svedas served as Piano Instructors at The Music Settlement and many children of Lithuanian immigrants have taken lessons at The Music Settlement, including Ingrida Bublys, the Honorary General Consul of the Republic of Lithuania.

The concert will take place in the Glick Recital Hall of The Music Settlement’s historic University Circle campus and is open to all ages. Seating is limited. Purchase your ticket now for a remarkable afternoon in celebration of Lithuanian culture!

While we live in a world of great diversity, there is tremendous comfort in knowing music and the arts truly unite us all. This one-of-a-kind event invites the Cleveland community to experience that connection and celebrate the Lithuanian culture.

This event is generously funded by Pletra, The Cleveland Lithuanian Development Fund.