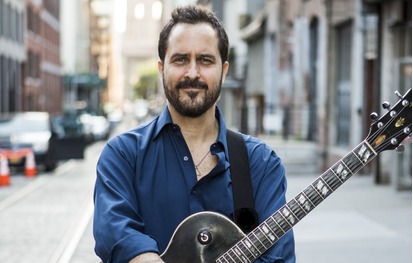 Jonathan Kreisberg Quartet makes their BOP STOP debut! Tickets to attend this "Don't Miss" concert are $25 each. This concert will not be livestreamed. Featuring:

Guitarist Jonathan Kreisberg has been steadily building his name as one of the most compelling composer/performers in Jazz. Combining timeless melodicism with forward thinking lines and textures, His style and approach has created a strong following of fans and influenced young guitarists all around the world. He frequently tours worldwide and records with his own groups and has played for 12 years with the late Dr. Lonnie Smith, who said of Kreisberg "He is a passionate musician with great vision, and he is constantly in fiery pursuit of innovation.”

“He plays the HELL out of the guitar” - John Scofield

Guitarist and composer Jonathan Kreisberg has built a strong worldwide following and has influenced the next generation of musicians with his unique combination of timeless melodicism and forward thinking lines and textures.

Jonathan began composing while still in his teens, and in addition to his work as a Jazz composer his music was also featured in many concerts of varying styles including scores for Playwrights Horizon in NYC, the Goodman theater in Chicago, and Hartford Stage. He has led various groups with star players and performed as a sideman with such notables as Lonnie Smith, Joe Locke, Ari Hoenig, Yosvany Terry, Larry Grenadier, Bill Stewart, Gary Versace, Will Vinson, Kevin Hays, Mark Ferber, Matt Penman, and Martin Bejerano among others. He has released 11 critically acclaimed CD's including "The South of Everywhere", "Shadowless", "One" (his first all solo guitar recording), "Wave Upon Wave", "Kreisberg Meets Veras", and "Capturing Spirits - JKQ Live!". He has received the ASCAP Plus Award annually for 15 years.

For the past 7 years Jonathan has also been a constant collaborator with NEA jazz master Dr. Lonnie Smith, who says of Kreisberg “He is a passionate musician with great vision, and he is constantly in fiery pursuit of innovation." Jonathan worked as performer and associate producer for Dr. Smith's recent works on Blue Note Records. He has performed 20th century works with the New World Symphony under Michael Tilson Thomas.Jonathan is also a respected educator with over 20 years of experience. In 2017 he released his first book of compositions and transcriptions, OFFERINGS OF NOTE, as well as a series of instructional videos called POLYRTHYTHMIC GUITAR. He also founded “EXPLORATIONS OF NOTE”, a unique online music education program for advanced players.