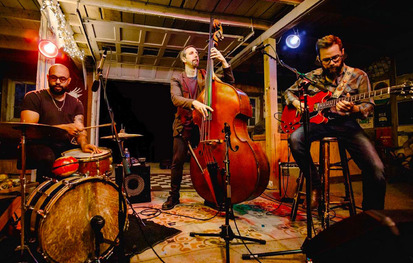 The dynamic trio from Chicago will perform an exciting set of music at the BOP STOP. Tickets are $20 each to attend the show in person. This show will also be livestreamed on BOP STOP's Facebook page at showtime. Accessing the stream is free but donations are encouraged and can be made at www.givebutter.com/PolicastroTrio

Hailed by Downbeat for its “deft analysis of choice repertoire,” and by the Chicago Reader for its “diversity of approaches to all kinds of source material,” the JOE POLICASTRO TRIO is a forward-thinking, Chicago-based jazz trio led by bassist Joe Policastro featuring guitarist Dave Miller and drummer Mikel Avery. While firmly rooted in jazz, the band’s open-minded, inclusive nature draws upon a wide array of musical styles and sources while still keeping the aesthetic of an acoustic trio intact. The band has released five albums to date. Their current release, Sounds Unheard 2012-2022, is an assemblage of new recordings, outtakes, and unreleased recordings documenting the life of the trio from its earliest iteration its recent incarnation. Their last album, Nothing Here Belongs (2019) focused on the band's original music, whereas previous releases, West Side Story Suite (2013), POPS! (2016), and Screen Sounds (2017), highlighted the trio's ability to remake unlikely songs in its own raw, highly idiosyncratic fashion. Beyond Chicago, the band has been extensively playing together throughout the US and Canada having even performed for President Barack Obama in October of 2016.