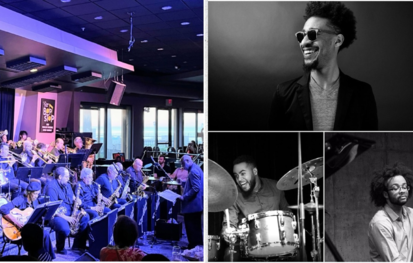 Don't miss this wonderful evening of jazz, blues and big band music as we celebrate the retirement of Bandleader & Music Director James T. May, Jr., after 23 years of directing Gabriel's Horns. This concert will also include a special opening performance by The Theron Brown Jazz Trio. Tickets for this event are $15 in advance and $20 at the door on the day of the performance. The concert will also be livestreamed on BOP STOP's Facebook page at showtime. Accessing the stream is free but donations are encouraged and can be made at www.givebutter.com/JamesMayRetirement

The mentoring of young musicians is an integral part of Gabriel's Horns mission. Over the past two decade, Gabriel's Horns has fostered a lot of talent allowing young ambitious musicians to evolve into mature accomplished artists.

The Theron Brown Jazz Trio is in the business of making you feel good and digging into the roots of jazz, gospel, and fusion. The trio is truly special and has a sound that is recognized in Northeast Ohio as something to be excited about!

A glimpse of gospel, jazz, and soul from the great legends is what inspires the sound of pianist Theron Brown's music. But the reason he plays is to encourage and influence people through his talents. Born and raised in Zanesville, Ohio, Theron currently resides in Akron, Ohio, where he is the artist coordinator for Curated Storefront, artist director at I Promise School, and the founder and artistic director of the Rubber City Jazz & Blues Festival which takes place annually in Akron, Ohio's downtown historic district. You can see him regularly performing at many jazz clubs and theaters in northeast Ohio. Theron is immensely involved in promoting the arts scene in Ohio.

Theron received an amazing opportunity as he auditioned for and was cast as young Herbie Hancock in the 2016 released film about Miles Davis, Miles Ahead, directed by and starring Don Cheadle.

In 2019, Theron released his debut album, No Concepts. Theron is currently working on his second album titled "Spirit Fruit", which reflects on essential and fundamental characteristics that bring positive vibes to peoples' lives. This was inspired by Galatians 5:22-23.