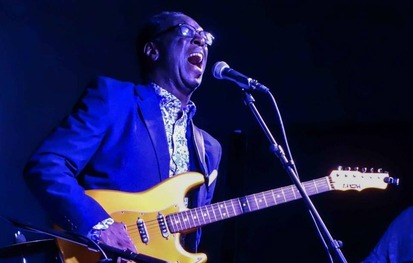 Get ready for an epic night of blues as the Sam Hooper Group returns to the BOP STOP! Tickets to attend in person are $20. This event will also be livestreamed on BOP STOP's Facebook page at showtime. Accessing the stream is free but donations are encouraged and directly support the band. To donate, select "Donation: Livestream Attendee" as your Ticket Option above and follow the steps below:

Sam Hooper Group is an exciting Cleveland band rooted in the blues. Originally formed when Hooper lived in Boston, the band has evolved through tours and recording in the USA and Asia to develop its own interpretation of this classic art form. Hooper has kept the approach fresh, since returning to his hometown roots in Cleveland, OH eight years ago and performing all over Northeast Ohio. The current band is a mix of talented musicians who are old and new friends with experience in jazz, rock, funk, and blues. The mailing list grows with every performance so the bands influence is steadily growing! Check them out on their newest CD, Sam Hooper & Mike Null, HOODOO BLUES.

The band won the 2018 Northeast Ohio Blues Association, (NEOBA) BLUES CHALLENGES and were a semifinalist in the The International Blues Challenge (IBC) in Memphis, TN, January, 2019.

The group has showcased at New York City's Soul of the Blues Festival and Alabama's W.C. Handy Music Festival. Sam Hooper Group was a finalist in Boston's "Battle of the Blues Bands." Hooper has toured as a featured performer in Chinese recording artist Zhu Ming Ying's "Dream of an Artist" tour, playing in front of over 84,000 people in 14 cities in China. In 2009, Hooper won the "King of the Blues" competition hosted by Guitar Center's Cerritos, CA store. A documentary of Hooper's musical journey was produced by a Boston area Cable TV provider and can now be enjoyed on youtube.com.

After years in Boston and Los Angeles, Hooper returned to his hometown roots in Cleveland eight years ago. He and his new bandmates have been winning over new fans with performances at popular locations including Nighttown, Beachland Ballroom and Tavern, House of Blues, Bop Stop, Happy Dog at the Euclid Tavern, Hard Rock Rocksino, JACK Thistledown Racino, Music Box Supper Club, The Winchester Music Tavern, internationally renowned, Tri-C JazzFest, and on TV's FOX 8 Morning Show.