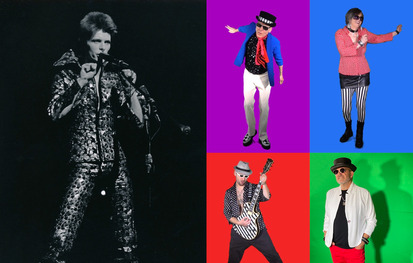 Tickets for this event ar $25 each. This event will not be livestreamed.

Exploring themes of sanity, schizophrenia, and mental health, these presentations will feature synchronized video, a dazzling light show, interviews, a slew of new original songs by Vanity Crash, and a selection of Bowie deep cuts and favorites, all performed in the Glam Punk style foreshadowed by Bowie's band The Spiders From Mars, which influenced Punk, Post-Punk, Glam, New Wave, Goth, New Romantic, and decades of styles since.

The album Aladdin Sane was Bowie's first as a bonafide superstar, and was written mainly on the road during the artist's first tour of the United States, kicked off with his US debut at Cleveland's Music Hall on September 22, 1972. It was pianist Mike Garson's first gig with Bowie, and he eventually performed and recorded with the artist for decades, right up to his last public performances before his passing in 2016.

An exclusive interview with Mike Garson is featured in the show, and Vanity Crash will perform their song, Angel and Me, which showcases Mike Garson on piano. On the heels of the just-released Moonage Daydream, the feature film by Brett Morgen that was the first to be endorsed by Bowie's estate, the Cracked Actor show takes a more narrative approach, integrating key unique interviews with stunning live music and video. The live performance features exclusive interviews with members of Bowie's band and professionals discussing issues of mental health and schizophrenia that infused Aladdin Sane and most of Bowie's music through his lifetime, along with musicologists and biographers offering insightful details and analysis.

Woody Woodmansey, drummer for Bowie’s groundbreaking early-1970’s band The Spiders From Mars, is featured in an exclusive interview, along with psychotherapists, an expert from the Rock and Roll Hall of Fame, and a musician colleague of Bowie’s, as the show explores the issues of mental health and madness that Bowie explicitly deals with in his music.

About Thomas Mulready: Acclaimed pop culture presenter Thomas Mulready is known for his avant-garde non-profit festivals: Ingenuity Fest, now in its 15th year, and the legendary Performance Art Festival, the largest festival of performance art ever. He created the CoolCleveland media network to turn people on to the coolness of Cleveland. Assiduously researched and painstakingly organized, Mulready’s performance art has been presented in Cleveland, Chicago, New York and Paris, and he served as a Senior Research Consultant in the United Kingdom. His multimedia presentations on Andy Warhol, The Velvet Underground, David Bowie, Glam and The Beatles have been presented at universities, jazz clubs and aquariums.

About Vanity Crash: Vanity Crash was born on stage under hot lights in the crucible of sound and fury as the glam-punk band The Angry Inch in the rock musical Hedwig and the Angry Inch. Ever since, Vanity Crash has been dressing up and throwing down eye-popping synchronized light shows, outrageous stage costumes and provocative attitude, opening for the likes of the New York Dolls, Poison, Semi Precious Weapons, the Darkness and Gogol Bordello. Their recent celebrated tributes to pop culture heroes include timeless gems performed live alongside their own incendiary originals. Vanity Crash recently dropped their 5th original release, Phantasmagoria, which includes an original track featuring David Bowie’s longtime pianist, Mike Garson. View the Vanity Crash trailer here: https://youtu.be/9x3BzTsOMr0

Photo of David Bowie at his US debut at Cleveland Music Hall 09.22.72 by Anastasia Pantsios