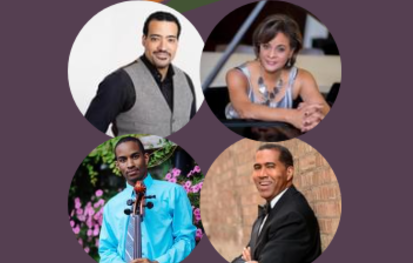 The concert will feature four world-renowned Cleveland artists performing works by local African-American composers. TMS will host the event on Friday, February 24 at 7:00 PM at its historic University Circle campus.

While Northeast Ohio's rich legacy of African American classical music performance and composition is not nationally well-known, during the late 19th and 20th century it was a hub of activity and training for young Black musicians. During this period, musical training was available to them at only a select number of schools, such as Oberlin Conservatory, the Cleveland Institute of Music, New England Conservatory, and Howard University. Composers such as Nathaniel Dett, Hale Smith, Dolores White, H. Leslie Adams, George Walker, and many others were able to pursue musical training at the secondary and conservatory level in Cleveland and the areas surrounding Oberlin Conservatory. An emphasis on racial inclusion was supported in part by the prominent role played by certain parts of Northeast Ohio in the Underground Railroad, including the towns of Oberlin and Yellow Springs.

Linking Legacies celebrates the legacy of these composers by featuring performers with personal connections to the institutions where they trained, and to the composers themselves. This program will highlight works for voice, piano, cello, and viola. Read more about the talented performers below.

More About The Performers:

Tenor Cornelius Johnson’s voice has been described as “expressive and soaring” (The Post Standard, Syracuse, NY). His repertoire encompasses classical, musical theatre, opera, and sacred music, and his talent has taken him to perform around the world and in several world premieres. In addition to his performance career, Mr. Johnson is an associate professor of music and chair of the Humanities Department at Olive-Harvey College, and an artist faculty of voice in the Theatre Conservatory at Roosevelt University.

Described by the New York Times as “eloquently plangent, making a powerful impact,” Khari Joyner has a following both nationally and abroad as a versatile concert cellist, chamber musician, and ambassador for the arts. He has made numerous guest appearances with orchestras and ensembles across the world and has given many cello masterclasses and lectures at notable institutions in the U.S. He also serves as Assistant Professor of Cello at Baldwin Wallace Conservatory.

Chris Jenkins, Associate Dean for Academic Support at Oberlin Conservatory, is an educator, administrator, and performing violist. His international engagement has included performances and teachings around the world. He is currently earning a DMA in viola performance from the Cleveland Institute of Music, and a PhD in Historical Musicology from Case Western Reserve, where his work focuses on the music of African-American composers.

Dianna White-Gould is an active soloist, accompanist and educator who has received world-renowned praise, as she has studied in France, toured Germany and most recently Budapest, Hungary performing as featured accompanist and soloist. She has a strong interest in music of African-American composers and with her group Linking Legacies, has given premieres across the world honoring astonishing African-American composers. She is on faculty at The Music Settlement, The Tri-C Vocal Arts Mastery Program and The Dike School of the Arts, where she directs the Choir and Keyboard program.