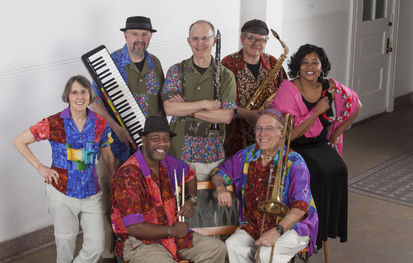 “Yiddishe Cup is now Funk a Deli,” bandleader and clarinet/sax player Bert Stratton said. “We’re in our 30th year and want to do something a little different, to keep it new.”

The Cleveland Heights-based klezmer band – which is booked nearly every weekend will play the old stuff and perform in Yiddish, English and what Stratton calls “Yinglish.”

But with the addition of some new musicians who are R&B mavens schooled in the songs of Martha Reeves, Gladys Knight and Tina Turner, the band will be mixing klezmer with Motown.

An unintentional experiment in merging musical genres – and evidence of the high-risk/high-reward nature of this creative enterprise – occurred during the summer of 2015. Yiddishe Cup was booked at Cain Park’s Evans Amphitheater in Cleveland Heights at the same time that a production of the rock musical “Godspell” was going on at the Alma Theatre next door.

Pop rock show tunes and the traditional folk music that Ashkenazi Jews of Eastern Europe have been listening to for centuries filled the air and blended perfectly.

Not long after, Yiddishe Cup was playing at a Purim celebration at Park Synagogue, in Cleveland Heights and Pepper Pike, and Rabbi Joshua Hoffer Skoff suggested the band mix in some rock ‘n’ roll with klezmer.

“We ended up doing a song from Sly and the Family Stone, which went over well and we had a really good time playing it,” Stratton said.

Soon they wrote a fusion tune called “Ball of Tradition,” which mashes the Temptations’ funk classic “Ball of Confusion” with the opening song from “Fiddler on the Roof.” And they were off and running in a new direction.