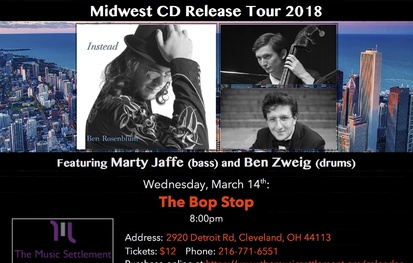 Award-winning jazz pianist, composer and accordionist Ben Rosenblum has been described as “mature beyond his years,” (Jon Neudorf, Sea of Tranquility), and as an “impressive talent” (C. Michael Bailey, All About Jazz), who “caresses [the music] with the reverence it merits” (Bob Doerschuk, Downbeat Magazine).

Ben is based primarily in New York City, and is a graduate of the Columbia-Juilliard program (in 2016). His original music combines his extensive knowledge of the history of jazz with a free-wheeling, modern melodic sensibility and powerful narrative approach to the piano. His profound passion for jazz, swing and world music genres finds expression in his unique fusion of harmonic and rhythmic elements from a wide array of sources, and gives rise to a signature compositional sound and style at once iconoclastic and deeply rooted in such figures as Bill Evans and Wynton Kelly. Ben's first priority in his composition and in his playing is always narrative – to tell a compelling story with his music, while reaching the hearts of his audience, connecting on an emotional, an intellectual and a spiritual level.

Reviewers of his debut album Instead – released in 2017 with bassist Curtis Lundy and drummer Billy Hart – have been impressed by his musicality and his tasteful playing in light of his immense technical skill. Bob Doerschuk of Downbeat Magazine gave the album four stars, and wrote, “He has the chops to shoot off a few fireworks, … but that doesn't seem to be a priority when covering sacred material.” C. Michael Bailey notes approvingly: “there do emerge conservatoire aces with grit in their imagination and a facility to express such in their playing. Ben Rosenblum is one such performer/composer. The Julliard-Columbia trained pianist brings a freighter of technique to the keyboard, while still maintaining enough earthiness in his playing to satisfy even the fussiest listener.” Fred Stal of RG Magazine most recently described his experience of listening to Ben's live CD release performance: “The music keeps you on your feet and not wanting to miss a single moment of magic. ... Raindrops from heaven poured down with style and grace from Rosenblum’s piano.”

Born and raised in New York City, Ben had the opportunity to study with some of the most influential figures in jazz piano, including Frank Kimbrough, Bruce Barth, Ben Waltzer and Roy Assaf. At the early age of sixteen, the originality of his work was already being recognized with numerous awards, including the ASCAP Young Jazz Composers Award (2010), the Downbeat Student Music Award for Best Original Song (2010) and the Downbeat Student Music Award for Best Arrangement (2011). As a result, even before entering Columbia, Ben was commissioned by the XIBUS World Orchestra to write a piece for performance at New England Conservatory's Jordan Hall in 2012. Ben has continued to earn numerous distinctions and honors in recent years. In 2015, he was a finalist at the American Jazz Pianist Competition in Melbourne, Florida, and in 2016, at the Jacksonville Jazz Piano Competition in Jacksonville, Florida.