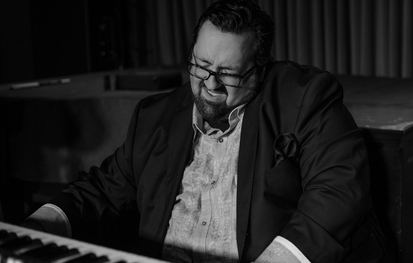 THE 7PM SHOW HAS SOLD OUT BUT WE STILL HAVE TICKETS REMAINING FOR 9:30

Joey DeFrancesco makes his BOP STOP debut tonight (2/9). We are presenting a 7pm show and a 9:30pm show so be sure to purchase tickets to the time that you would like. Featuring:

JOEY DEFRANCESCO’s emergence in the 1980s marked the onset of a musical renaissance. Organ jazz had been a form of music that literally went into hibernation from the mid-seventies to the mid-eighties largely because of the introduction of high-tech, light-weight keyboards. It was Joey, however, that ignited the flame once again with the sound of his vintage Hammond organ and Leslie tone cabinet. He not only illuminated this once dormant music form but brought back the many proponents of jazz organ who had been shuffled by record producers and club owners to lesser roles within the music industry. Befriending and supporting those who preceded him, Joey became the new-age proponent of an instrument that had been pushed aside in favor of the growing technology.

Considered a child prodigy, Joey remembers as far back as age four, playing jazz tunes modeled by his father, Papa John DeFrancesco and memorizing music from the many jazz albums in their home. Papa John, a jazz organist himself, took young Joey under his wing and nurtured his rapidly developing skills, bringing Joey along with him to gigs, Joey would sit-in with as many seasoned Philadelphia musicians who were around. Legendary players like tenor saxophonist, Hank Mobley, or drummer, Philly Joe Jones, would soon become aware of young Joey DeFrancesco and acknowledge his enthusiasm. Joey’s grandfather and namesake, Joseph DeFrancesco, was the patriarch and, himself, a musician’s musician; able to pick up a new instrument and teach himself to play. This gift was passed down to young Joey and now manifests itself in Joey’s extraordinary keyboard skills; piano playing; and organ wizardry – not to mention his undeniable mastery of the trumpet.

Today, Joey has been around the world dozens of times touring & recording with his own trio as well as part of all star projects, some of which include, Ray Charles, David Sanborn, Arturo Sandoval, Frank Wess, Benny Golson, George Coleman, James Moody, Steve Gadd, Elvin Jones, Jimmy Cobb, George Benson, John Scofield, Joe Lovano, Larry Coryell and Bobby Hutcherson, not to mention the myriad of foreign jazz artists that he’s collaborated with as he travels.

Quoted as the Master of the Jazz organ, Joey has received countless Jazz Journalist awards, and accolades worldwide.

“Mr. DeFrancesco is a deeply authoritative musician, a master of rhythmic pocket, and of the custom of stomping bass lines beneath chords and riffs.” -New York Times