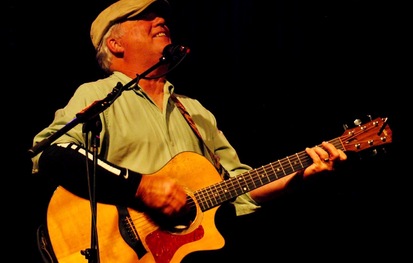 If you are from Northern Ohio you might know Alex Bevan as the guy who wrote and performed “Skinny Little Boy”, “Grand River Lullaby” and “Have Another Laugh on Cleveland Blues!”....

Sunday evening, February 17th at 7pm, Alex will recreate the “Great Ohio Slide Tour” of 1978 for a one night of not to be missed romp through the past with a wink from the present at the Bop Stop!....

The “Skinny Little Boy from Cleveland, Ohio” will return as Retro Boy.... conjuring the freewheeling performance style that brought Alex Bevan to the forefront of performers who inhabited the college coffeehouses and small hall concerts of the 1970’s.

The years from 1971 to 1979 found Alex logging many thousand miles of “hard traveling around this mighty land” (driving on the interstate roads) and performing as an opening act for such headliners as the Beach Boys, Doobie Brothers, Michael Stanley Band, Earl Scruggs Review, Pure Prairie League, The Nitty Gritty Dirt Band, Jerry Jeff Walker, Jimmy Buffet, Livingston Taylor, Billy Joel and quite an additional eclectic list of other performers. All these influences combined and allowed Alex to grow into his own lyric style of “folk/rock” that culminated in Alex releasing his first of many self produced recordings.

One night only... They say you “can’t go back”... but you can remember the magic!