Čiurlionis: In Pursuit of Soundscapes featuring Duo Zubovas from Lithuania 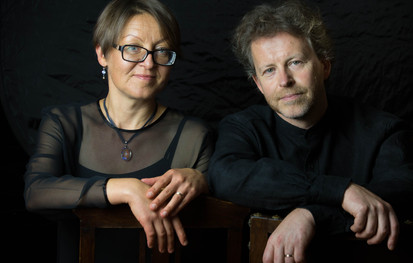 The Music Settlement (TMS) will present Čiurlionis – In Pursuit of Soundscapes, performed by Duo Zubovas. This performance will showcase the music, paintings, and literary works of the famous Lithuanian Mikalojus Konstantinas Čiurlionis (1875 – 1911), a true Renaissance man who is considered one of the pioneers of abstract art. The concert will take place in the Glick Recital Hall of The Music Settlement’s historic University Circle campus and is open to all ages. A coffee reception featuring traditional Lithuanian foods like sakotis will immediately follow the concert.

In honor of the recent 100th anniversary of the Republic of Lithuania’s Independence Day, this event will shine a light on the Lithuanian community and its cultural contributions to society. This concert is designed to expand knowledge of the Republic’s cultural landscape and contributions through a dynamic discussion of M.K. Čiurlionis’s masterworks interspersed between musical performances.

Founded at the peak of the Settlement Movement, TMS’s initial purpose was to help assimilate and ease the transition of immigrants into the community. Using music and the arts as a universal language, immigrants could share their knowledge and culture as they adapted to Cleveland life. Throughout our 106-year history, many immensely gifted Lithuanian musicians and composers have studied and taught at TMS, including concert pianist, Andrius Kuprevičius, who settled with his family in Cleveland in the 1950s and was the Artist-in-Residence at TMS for several years before he was named a Professor of Piano at Cleveland State University.

Čiurlionis – In Pursuit of Soundscapes is a must-see concert that will bring together a wide audience to hear Duo Zubovas, a Lithuanian piano duo formed in 1977 by two of Lithuania’s most talented pianists - Sonata Deveikyte and Rokas Zubovas. Born and raised in Lithuania, Sonata and Rokas studied at the M.K. Čiurlionis National School of Arts in Vilnius, garnering prizes in several national and international competitions. Duo Zubovas has toured throughout North America, Europe and Asia presenting world premieres of ten new works.

Seating is limited. Purchase your ticket now for a remarkable afternoon in celebration of Lithuanian culture!

This concert is generously funded by Pletra, the Cleveland Lituanian Development Fund.