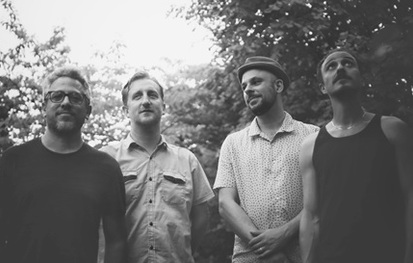 
Ziv Ravitz, drThe Christoph Irniger Trio celebrates melody without once degenerating into the trivial. They are tone poems which demonstrate that accessible melodies and complex tonal worlds need not be mutually exclusive and can in fact make sense of each other. Irniger is a master of orchestration and rejects the hierarchy of soloist-plus-rhythm. Instead of using the compositions as springboards for solos, he finds interesting ways for the improvisations to underline the compositional characteristics. Melody, arrangement, improvisation: the trio fuse them all into one tightly integrated and alluring package,’ writes American jazz critic Kevin Whitehead.In the current setting the band plays as quartet with saxophone player Michaël Attias - who was a member of bands of Paul Motian, Ralph Alessi and Kris Davis amongst others - and presents together the album "Open City" which is released in September 2020 on Intakt Records.

The Christoph Irniger Trio was formed in 2012, with Raffaele Bossard on double bass and Ziv Ravitz on percussion. With Gowanus Canal (2012) and Octopus (2015) they have delivered two exemplary albums. The trio can be compared with an equilateral triangle; Raffaele Bossard, born 1982 in Los Angeles, raised and educated in Zug, and Ziv Ravitz, born 1976 Be’er Scheva in Israel, currently living in New York, sit eye to eye with Irniger. They are not only eminent technicians, they are also adept at interplay, like sleepwalkers. With illustrious guests - as also Loren Stillman (born 1980) and Nils Wogram (born 1972) on the record - Christoph Irniger’s trio creates music which unites intelligence and passion, timeless yet up to date.Glenn Astarita writes on All About Jazz: "Young Swiss saxophonist, composer Christoph Irniger is one to watch. His blossoming stature on the European jazz scene is partly due to his invigorating and meticulous compositional approach.
„..a homegrown rising young sax star“ (Jazzwise Magazine, UK)"(...) facing history head-on and finding the means to reconcile it with a personalized sound." Derek Taylor, Dusted Magazine (US)"This music was recorded in the winter of last year and has something of a lacerating quality of a masterpiece. (...) a delightful ensemble sound that is full of energetic excitement, brilliance and the genuine avant-garde spirit." Raul da Gama, JazzDaGama (CA)

------------------
Christoph Irniger, born 1979, is a Swiss saxophonist, composer and bandleader. In recent years, Irniger has made a name for himself in a range of line-ups, playing jazz, rock and related musical styles. Irniger is leader of the band Pilgrim and the Christoph Irniger Trio which between them have released several albums (mostly on Intakt Records) so far. From 2000 to 2006 Irniger studied music education at the Zurich Jazz School, and performance at the Lucerne School of Music with Christoph Grab and Nat Su. His work has been documented on twenty albums to date. He has played concerts and tours throughout Europe, Asia and the USA. His regular visits to Berlin and New York have led to a number of diverse collaborations, including: Nasheet Waits (No Reduce Jaywalkin’ (nWog, 2013)), Michael Bates, Don Philippe and the band Counterpoints with Ohad Talmor.

The double bassist Raffaele Bossard, born 1982 in Los Angeles, studied with renowned bassists such as Heiri Känzig and is leader of his own band, Junction Box. Bossard is sideman in Mats-Up, trumpeter Matthias Spillman’s band, and also plays in the collective NoReduce.The drummer Ziv Ravitz, born 1976 in Be’er-Scheva in Israel, is a member of the Avishai Cohen's Big Vicuous, the Shai Maestro Trio and the Yaron Herman Group. An important figure in the Israeli jazz scene, Ravitz is currently one of the most sought-after percussionists in New York, where he lives.

Saxophonist/Composer Michaël Attias has earned a reputation as one of the most questing and keenly collaborative figures on the 21st-century New York City Jazz scene. Pursuing an active and multiform career on both sides of the Atlantic, he has released eight albums as a leader, most recently the solo 2019 Out Of Your Head release échos la nuit, and the 2017 Clean Feed debut of his Nerve Dance quartet with Aruán Ortiz, John Hébert and Nasheet Waits. As a sideman, he has performed and recorded in groups led by luminaries such as Anthony Braxton, Paul Motian, Oliver Lake, Masabumi Kikuchi, Anthony Coleman, Ralph Alessi, Tony Malaby, Kris Davis, Andy Milne, Fay Victor and a host of others. Attias' compositions have also appeared on albums by Eric Revis, Kris Davis, Anthony Coleman, and the Wing Walker Orchestra.