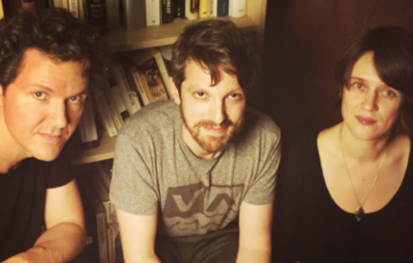 Huge thanks to our friends at New Ghosts for partnering with us to make this show happen! Tonight we present Crump/Laubrock/Smythe

Stephan Crump, Ingrid Laubrock and Cory Smythe—this trio consists of three highly innovative improvisers. Memphis-bred, Grammy-nominated bassist Stephan Crump is emerging as a singular voice as a composer, with groups like Rhombal and his Rosetta Trio, and is a longtime collaborator with adventurous jazz composers, including Vijay Iyer. Originally from Germany, saxophonist Ingrid Laubrock is now a staple of the Brooklyn scene, both as a composer/leader with groups like Anti-House and Sleepthief and a collaborator with such musicians as Anthony Braxton. Pianist Cory Smythe works actively in new, classical, and improvised music and is celebrated across genre lines, as a core member of the International Contemporary Ensemble and a Grammy-award-winner for his work with violinist Hillary Hahn. The trio released its acclaimed album Planktonic Finales on Intakt in 2017, a series of recordings that demonstrate the trio’s finesse and sensitivity in collective playing. As Christoph Wagner wrote in the liner notes: "Over long periods, the music seemed to play itself...When listening back to the recordings, at times even the musicians were no longer sure if what they were hearing came from sax or from bowed bass."

“Generating the feeling of both inevitability and surprise” - Downbeat