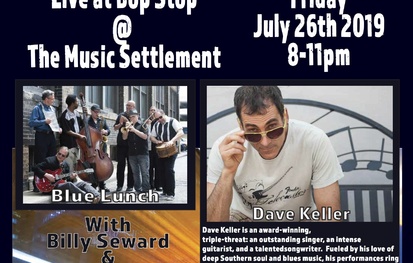 The late 1940’s and early 1950’s were a magical time in American musical history, when blues, rhythm & blues, swing and rock & roll were all one thing. Blue Lunch explores that music and makes it their own. From Cleveland, OH, the band features eight virtuoso musicians performing on guitar, piano, upright bass, drums, harp, saxophones, trumpet, and trombone. In addition to their instrumental work, Blue Lunch also boasts vocalists that includesdo-wop style harmonies in their repertoire. Blue Lunch has released six cds, Recorded Live at Wilberts, Eyes Wide Open, Not Live at the Copa, Big Sound Blues, Sideswiped, and Saxophone Shootout II.

Dave Keller is an award-winning, triple-threat: an outstanding singer, an intense guitarist, and a talented songwriter. Fueled by his love of deep Southern soul and blues music, his performances ring out with passion, integrity, and an ability to break down the barriers between performer and audience.

Ever since renowned guitarist Ronnie Earl chose Dave Keller to sing on his album Living In The Light, Keller's star has been on the rise. In just a few short years, Keller has been nominated for a Blues Music Award for Best Soul/Blues Album, won the International Blues Challenge Best Self-Released CD Award, and been chosen for Downbeat's Best Recordings of the Year.