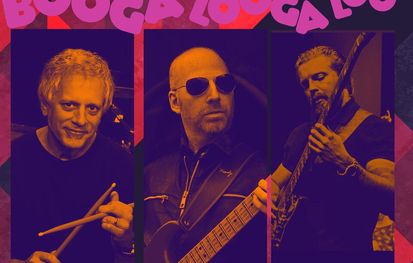 Guitarist, Oz Noy, brings his powerhouse trio featuring Dave Weckl on drums and Hadrien Feraud on bass to BOP STOP! We are presenting two shows with separate seatings so be sure to buy your tickets to your desired showtime (7pm or 9pm). The shows are the same despite the price difference. We are just trying to encourage people to stay out late on a weeknight!! This is so worth it!!

This is how virtuoso guitarist Oz Noy describes his intoxicating blend of jazz, funk, rock, blues, and r&b.

Born in Israel, Oz started his professional career at the age of 13 playing jazz, blues, pop and rock music. By age 16, he was playing with top Israeli musicians and artists. By age 24, he was one of the most established studio guitar players in the country. Oz was also a member of the house band on Israel’s top-rated television show for more than two years.

Since his 1996 arrival in New York, Oz has made a huge impact on the local and international music scene. His unique and intoxicating style has broken all the rules of instrumental guitar music by focusing on the groove. All-stars such as Keith Carlock, Anton Fig, Vinnie Colaiuta, and Dave Weckl often contribute on drums, with bassists Will Lee, James Genus, and Reggie Washington.

In 2004, Oz signed with Magna Carta Records and in 2005, released his highly-acclaimed studio record “HA!” with his all-star band featuring Fig, Carlock, Lee and Genus plus special guests Mike Stern and George Whitty.

In April of 2007, a licensing deal with Magna Carta and Japanese label Videoarts opened the door for Oz’s music in Japan. Later that year saw the release of “Fuzzy,” Oz’s third record under the Magna Carta label. For Fuzzy, Oz’s all-star band is joined by various special guests including Colaiuta, bassist Jimmy Johnson, and keyboardists Whitty and Jim Beard.

In March, 2015, Oz released his 7th album “Asian Twistz” featuring Dave Weckl & Etienne Mbappe. The live album was recorded during a tour in Asia during the summer of 2014.

For his accomplishments as a trend-setting guitarist, Oz won the highly acclaimed Guitar Player magazine readers poll for “Best guitar riff on a record” (2007), “Best new talent” (2008), and “Best out there guitar player” (2013).

Oz’s success both as an artist and an instrumentalist has built demand for him as an instructor. In 2011, he released two Instructional videos for Jazz Heaven, entitled “Guitar Improvisational Workout” and “Play Along Workout.” since 2015, Oz released three instructional videos for My Music Master Class (MMMC) entitled “Unlocking The Neck” , “Blues, Bends and Beyond” and “Effects On The Gig”. He also released four videos for True Fire, entitled “Improv Wizard”, “Essentials Funk Rhythm Guitar”, “Twisted Guitar-Blues Soloing” and “Twisted Guitar- Blues Rhythm”.