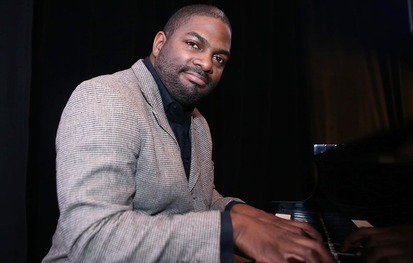 Born the eldest of three children in Cleveland, Ohio on December 5, 1981, Phillip K. Jones II began playing music at a very early age. By the age of four, he had learned and mastered the drums and began to play them in church. By age eight, his father, Rev. Phillip Jones, Sr., who shared duties as his Church’s Musician and Pastor introduced and taught Phillip, Jr. on the organ who quickly learned the instrument ‘by ear’. Additional mentoring from his grandmother, Clementine Jones, proved vital toward his development.

At age 12, Phillip studied at the Cleveland Music Settlement for two years. While attending, he was the organist for Greater Faith Baptist Church, where his grandfather pastored, and was also the organist for the Pentecostal Temple Church Of God In Christ. During this time he toured twice to Nice, France where he performed as drummer. Mr. Jones attended and graduated from Cleveland Heights High School. While there, he played for the school’s gospel choir and the jazz ensemble which earned him the privilege to perform with famed gospel recording artist, the late great Bishop Walter Hawkins.

After graduation in June of 2000, Phillip attended Hampton University and upon his return to Cleveland in August of 2001, he attended Cuyahoga Community College. During his two years there, he studied with various pianists and teachers such as Rodney Hubbard, Joe Hunter, Jackie Warren, Drene Ivy, LaFayette Carthon, II, among other notable players.

On May 27, 2007, Phillip graduated from the Oberlin Conservatory of Music with a Bachelor of Music degree. During his tenure at Oberlin he had the opportunity to perform with famed songstress Babbie Mason, and recorded on Bill Ransom's debut jazz CD “Generations”. On May 8 2015, Phillip also graduated with a Master of Arts degree from Cleveland State University.

While living in Cleveland, Phillip not only formed his own jazz quartet and recorded, he also formed a community gospel choir named the PKJones Ensemble and recorded many projects with them. He was and is yet a member of Cleveland’s Own Moment’s Noticed ( better and widely known as Hubb’s Groove), and continued to perform with various artists of different genres such as jazz vocalists Freddie Cole, Vanessa Rubin, Sachal Vasandani, Liz McComb, vocalist Eric Nolan Grant (of the legendary O’Jays), jazz saxophonist Tia Fuller, jazz trumpeter Sean Jones, Dominick Farranaci, jazz trombonist Jeff Bradshaw, R&B soul artists Mikki Howard, Conya Doss, Noel Gourdine, jazz bassist Sekou Bunch, jazz guitarist Dan Wilson, and several local artists in northeastern Ohio. Today, Phillip K. Jones II now lives in Houston,Texas, and continues to play the drums, piano, organ , and bass as well as musically produce and record for himself, and many artists in Cleveland, Ohio and abroad.

View our upcoming virtual concerts and past performances!