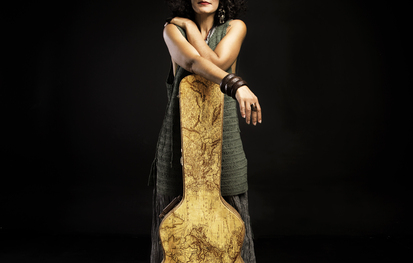 Brazilian guitarist and vocalist Badi Assad makes her BOP STOP debut! Moises Borges will perform an opening set of music. For this event we only have 15 tables for sale. Each table seats up to four guests. Get your table today before we sell out!

Based in São Paulo, Brazil, virtuoso guitar player, singer, vocal juggler and songwriter, Badi Assad has emerged as one of the most versatile artists of her generation. With more than 14 albums released worldwide and more then 40 visited countries, her 2006 CD Wonderland was selected among the 100 Best from the prestigious BBC London and was also included among the 30 Best on Amazon.com. The US magazine, Guitar Player, selected her from a pool of artists (that included the likes of Ben Harper and Ani DiFranco), as one of the guitar players that would revolutionize the world.

Embraced by record companies such as Verve (Universal) and eDGe Music (Deutsche Grammophon), she has played an array of international concerts over the past two decades, including innovative collaborations with Bobby McFerrin, Yo-Yo-Ma and David Broza, among others. She has performed in some of the most prestigious International Festivals, including North Sea Jazz (NE), Jarazum Jazz (KOR) and in theaters such as L’Opera de Paris (FR), Palais de Beaux-Arts (BE) and the Metropolitan Museum of Art in New York (US)...