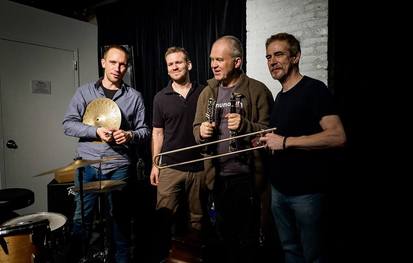 “Gjerstad is a choice elicitor of out-of-the-ordinary elocutions, refusing gadgetry and reed-fueled bric-a-brac in favour of a strong sense of asymmetrical melody, trawling the improbable waters of curvilinear liberty in search of the most disparate notes, looking for composure while surrounded by havoc,” writes Paris Transatlantic Magazine about the Norwegian saxophonist Frode Gjerstad. A powerful force on the Norwegian free-jazz scene, Gjerstad has worked with Evan Parker, Borah Bergman, Peter Brötzmann, Sabir Mateen, William Parker, Derek Bailey and Han Bennink. In 1984, Gjerstad founded the Circulasione Totale Orchestra, a large ensemble with a rotating personnel that has included leading experimental musicians such as Louis Moholo-Moholo and Lasse Marhaug. Steve Swell has been an active member of the NYC music community since 1975. He has toured and recorded with artists as musically diverse Lionel Hampton, Buddy Rich, Anthony Braxton, Bill Dixon, Cecil Taylor and William Parker. He has over 40 CDs as a leader or co-leader and is a featured artists on more than 100 other releases. Paal Nilssen-Love, who has collaborated with Gjerstad since he was 15 years old, has worked with Ken Vandermark, Joe McPhee and Mats Gustafsson. Johnny Ruun has worked with Gjerstad's Circulasione Totale Orchestra on numerous occasions. This new trio has thus far released three live recordings – MIR, East Of West and HideOut. The trio’s most recent release, At Constellation (Circulasion Totale, 2015) also features Swell.

Four Letter Words is a Chicago-based instrumental trio collectively lead by Jake Wark (tenor saxophone), Matt Piet (piano), and Bill Harris (drums). All three members provide original compositions to the group's repertoire, resulting in a wide range of tunes – some groove-based and others freely structured, some made of fragments of melody, and others unrelentingly melody-driven. All of the group's work is designed to allow for an emphasis on free improvisation and group interplay.