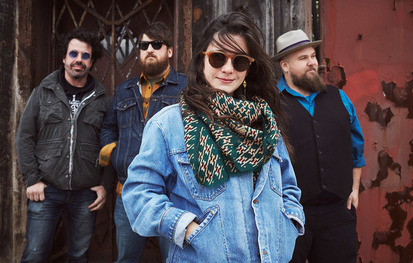 Johnny Iguana And The Claudettes return for an encore performance at BOP STOP!

The Claudettes fuse Chicago piano blues with the full-throttle energy of rockabilly and punk and the sultriness of '60s soul to write a thrilling new chapter in American roots music. Johnny Iguana mashes the piano alongside singer Berit Ulseth, bassist/singer Zach Verdoorn and drummer Matt Torre. Johnny, who toured for years with his cult-favorite rock band oh my god, is also a member of the Grammy-nominated groups Chicago Blues--A Living History and the Muddy Waters 100 Band. He has toured/recorded with Junior Wells, Buddy Guy, Otis Rush and more.

WHAT THEY'RE SAYING ABOUT THE CLAUDETTES:
GREG KOT, CHICAGO TRIBUNE: "A revelatory blend of jazz and blues, stirred with punk brio. There are also dashes of classical and world music, and enough stops, starts and hairpin turns to suggest the giddiness of Raymond Scott's cartoon music…How do they do it?"

JEFF ELBEL, CHICAGO SUN-TIMES: “Chicago’s premiere punk-blues group are back in high gear. Their fusion of sounds (ranges) from Otis Spann to the Minutemen and from Ray Charles to Raymond Scott…(and they) do wicked things to standards.”


NEW CITY (CHICAGO): “Definitely one you should be spinning…there’s enough energy going on to power your average Third World airport…barreling, hyper-saloon piano banging…you have to hear it to believe it…Chicago’s own neo-vaudeville barnstormers!”

BLUES MUSIC MAGAZINE: “Like Keith Moon chasing a crazed, pinked-up Little Richard… greasy rhythm and blues that makes the dance floor so slippery you need to sprinkle sawdust on the floor to keep from falling down…a great ride, one that’ll leave you shaking and laughing and wanting more the next time this rowdy carnival comes to town."

Band website with the band's back story, videos, tour dates and more: http://theclaudettes.com/