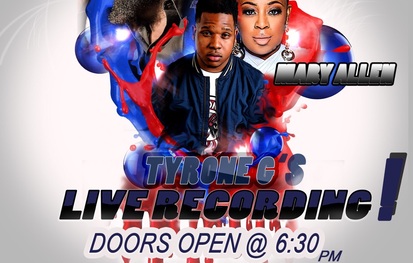 Tyrone G's live recording at BOP STOP will be an amazing experience!

Come and listen to the tasteful R&B and Neo-Soul vocals coming from Cleveland's own, Tyrone G. Tyrone has an album that is self entitled "Tyrone G" That was released to media streaming outlets including Apple music, Tidal, Spotify, and Google on March 25th 2017. Since then he has performed on many stages and has opened for many great artist such as Marsha Ambrosius and Eric Benet!

Tyrone G has been working hard on his latest project entitled "R&Bass". We are excited and waiting eagerly to hear all that he has been working on and now is your chance to hear it live up close. This show is full of special guest appearances and surprises! You will be entertained with an unforgettable experience!

Surrounded by music since birth, Tyrone's grandfather was a guitar player, and his father was a singer. At the age of 8, the Cleveland native began to pick up the guitar and played in a kids bands where he played a lot of old school r&b, pop, rock & blues. This birth him into a world that influences his music today. Developing a serious discipline for the arts, Tyrone knew he wanted to pursue a successful career in the music industry. By

the age of 12, he became the youth choir director, and teen praise team leader at the age of 15.

Strengthening his acting and dancing while attending The Cleveland School of the Arts in middle school and high school, he was selected 3 years in a row to attend Usher Raymond's Camp New Look located in Atlanta,GA. He was awarded opportunities to sing backup for Usher Raymond at the world leadership awards in 2010 becoming the youngest member to participate. During high school, the young passionate singer became a semi-finalist in "The Voice" regional mid-west competition, performed at the historic "Agora", political events, birthday parties, and festivals as well. One of his most memorable performances was being able to perform for Michael Jackson's mother at the Michael Jackson Festival in Gary, Indiana. After giving a stellar performance, he was asked to come back to the festival the next day and be one of the openers for the national acts. In 2016, Tyrone has become the winner of the IMTA (international Modeling & Talent Association) for "Male Actor of the Year" and "Male Singer of the Year" award. This competition granted Tyrone an experience of a life time, performing for every important agent and manager of this time including a private interaction with Atlantic Records! After his amazing performance, he was asked to perform again for the IMTA Awards banquet the next day!

After graduating high school, Tyrone began to take his musician skills of piano, guitar, and drums to the next level and began to write and produce his own records and records for other artist around the Cleveland area.In 2015, his first single entitled "Confidential" was released on Sound cloud, Reverbnation and Music Xray. His records received great reviews and feedback from industry professionals, building a fast growing fan base. "I know this is what I was called to do!", says the young entertainer who has released his debut album March 25th 2017. Since his album release, he has been awarded many opportunites such as being the opening act for Eric Benet & Marsha Ambrosius "M.E TOUR" at "THE METRO" in Chicago, IL. Tyrone's creative musical talents will win new audiences across the world.