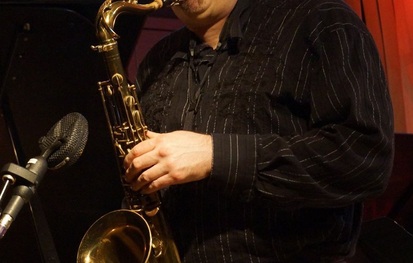 NYC based saxophonist, Russ Nolan, returns to the BOP STOP for an encore performance where he will play alongside Theron Brown and his trio!

Consistently voted onto DownBeat magazine’s Rising Star Annual Critics Poll, Russ Nolan’s music is often described as High-Energy Modern Jazz that both satisfies the intellect of its musical peers and speaks to everyone on a soulful level. Called a ‘renaissance man’ by those close to him, he has taken his experiences in sports, martial arts, business, after-school program volunteering, music education, and other activities to relate to a wider audience across the US and Canada. His 2016 release of Sanctuary from the Ordinary – Live at Firehouse 12 was voted onto DownBeat’s Best of 2016.

Russ is an accomplished and active Salsa dancer in NYC and has used his inspiration on the dance floor to craft his last four Latin and Modern Jazz releases Tell Me (2012) ; Relentless (2014) – featuring Latin Jazz Grammy Nominee Manuel Valera on piano; Call It What You Want (2015), and Sanctuary from the Ordinary – Live at Firehouse 12 (2016). Previous recordings include With You In Mind with the Kenny Werner Trio.

His original compositions draw influences from Herbie Hancock, Wayne Shorter, Bill Evans, Chick Corea and are infused with Afro-Cuban, Samba, Bossa Nova, Bolero, and Mambo rhythms. Russ’ ability to relate to non-jazz audiences is demonstrated in his jazz treatments of Pop Standards from The Beatles, Michael Jackson, and Stevie Wonder.