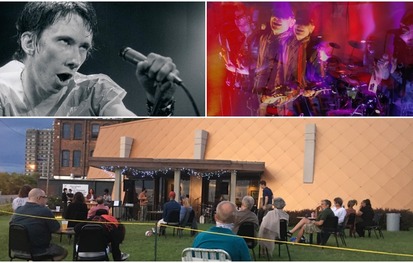 Years before punk reared its ugly head in New York or London, a group of misfits, art students and disaffected youth in our region, many of them shocked by the massacre at Kent State University, spun off bands and artists that eventually moved on to New York and London as leaders of the new punk scene.

Obsessive musicologist Thomas Mulready, in collaboration with glam punk heroes Vanity Crash, turn their attention to the rise of a movement that still shakes the world. This LIVE outdoor full concert event on Wed 10/7 includes original music by Vanity Crash, classics by The Velvet Underground, T. Rex, The Zombies and David Bowie, plus seminal gems from bands in the Cleveland/Akron/Kent axis who influenced generations such as The Pretenders, the Dead Boys, Rocket From The Tombs, Pere Ubu and Devo.

Be there for this musical concert played LIVE in front of a real audience, with masks, at tables comfortably spaced in the BOP STOP's temporary outdoor seating area. BOP STOP's outdoor bar is open but the kitchen is closed. Feel free to bring your own food. Tickets are $50 per table with each table seating up to four people. There are only fifteen tables available so buy yours today!

Then, on Thu 10/8 and Fri 10/9, special multi-media performances will be streamed live from inside Cleveland’s own BOP STOP which include rare video, photos, and first person interviews with the artists who were there at the birth of punk in our region. Get your ticket to the online livestream shows for Thu 10/8 and Fri 10/9, and find out how you can join the band and special guests backstage online for the After-Party.

Above photo by Anastasia Pantsios of Stiv Bators of Dead Boys at Cleveland Agora. Lower still montage from video of Vanity Crash by Donn Nottage.