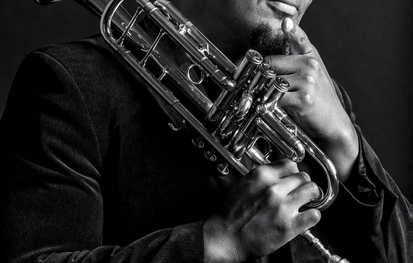 Trumpeter Curtis Taylor’s lyrical and melodic improvisational style displays a level of maturity far beyond his counterparts. His unique blend of soulfulness, harmonic sensibilities and rhythm melt together for an unforgettable sound that directly connects with the soul of the listener. According to Taylor, “ When played honestly, music is the ultimate conveyer of truth and beauty.”

In addition, Taylor had the great opportunity to tour internationally with virtuosic saxophonist James Carter’s Quintet, performing in: Germany, France, Italy, Spain, Sweden, Canada, and Austria. Rounding out the experience, was a week long stint at Yoshi’s in California again with the James Carter Quintet.

In 2014, Taylor relocated to southern California where he fostered a musical relationship with friend and mentor Kamau Kenyatta. Kenyatta, is a two-time Grammy-award winning producer for Jazz vocal-star Gregory Porter. While building the musical team for Porter’s “Liquid Spirit” album, he chose Taylor for the trumpet chair. Kenyatta stated that Taylor “graced the session with his elegant solos and precise ensemble playing” and noted his musicianship as “impeccable.” Gregory Porter’s “Liquid Spirit” would go on to receive the Grammy-Award for Best-Jazz vocal album of 2014.

Join us for this very special opportunity to hear this wonderfully talented musician and his band in a rare appearance in NE Ohio – get your tickets today!