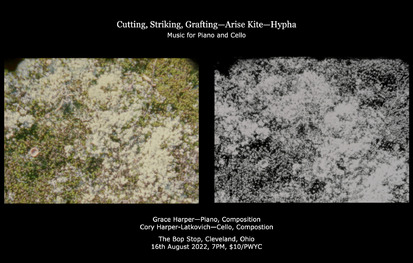 Grace Harper & Cory Harper-Latkovich perform original compositions for piano and cello. Tickets to attend this show in person are $10. This event will also be livestreamed on BOP STOP's Facebook page at showtime. Accessing the stream is free but donations are encouraged and can be made at www.givebutter.com/PianoAndCello

CORY HARPER-LATKOVICH is a cellist who balances his musical life between experimental musics of many genres. Born in Cleveland, Ohio, Cory moved to Toronto in 2007, where he studied composition, improvisation, and performance at York University. There he formed

Clarinet Panic, a band described as “scrappy chamber rock.” Infusing minimalism, free jazz, and noise music, Clarinet Panic became Cory’s main platform for composition for several years. The band played frequently in Toronto, toured Canada and the United States, and was featured in the Toronto Music Gallery Emergents series in 2015. Clarinet Panic disbanded in 2015 and subsequently, Cory has worked to diversify his practice. He has participated as a composition fellow in many contemporary music programs, such as the Array Music Young Composer Workshop, Toronto Creative Music Lab, Montreal Contemporary, and the Neif-Norf Summer Festival. He has been invited/commissioned to work with ensembles in Canada, the USA, and the UK. As well as developing a compositional practice within contemporary chamber music, Cory has an active solo practice involving cello, film, photography, and text.

GRACE HARPER is a Cleveland-based pianist, improvisor, and composer. She received a B.A. in Music from Cleveland State University and a Master’s in Ethnomusicology from Kent State University. She has studied piano with Natalie Spade, Barbara Klonowski, Lennie Orcino, and Chad Wachs and composition with Chris Auerbach-Brown and Andrew Rindfleisch.

Grace has participated in numerous experimental and free improvisational projects over the years. She has collaborated widely with Cleveland area improvisors Trepanning Trio, Manifesta, Bbob Drake, Alex Henry, Lisa Miralia, and many others. She has performed multiple times with internationally acclaimed percussionist Tatsuya Nakatani. In 2016, she participated in Mark Mothersbaugh’s 6-sided keyboard performance in conjunction with his Myopia exhibit at MOCA and the Akron Art Museum. In 2018, she performed with Manifesta as part of the CAN Triennial’s Cine X film program.

Cutting, Striking, Grafting: each an essential aspect of agriculture. A cutting is simply a stem of root removed from a parent plant. If this stem or root is replanted and begins growth, this process is striking. Grafting, most interestingly, is when two plants are joined and continue their growth together. Surprisingly these do not necessarily need to be two plants of the same species. As a dramatic example of this, the sculptor Van Aken's “Tree of 40 Fruit,” series grafts different species of stone fruit cuttings to one tree. Cutting, Striking, Grafting, takes two motifs—“cuttings”—and weaves them into two concurrent continuous melodies that span across 6 movements. There is a conscious obstruction to any semantic connotations a melody traditionally might have; melodies stutter, start and stop, push forward and pull back, meander, “resolve” abruptly, only to pick up again midstream. These cuttings are all “stems grafted to the root” of the baroque French suite—ex. J.S. Bach’s Cello Suites and French Suites for clavier. While the melody pushes and pulls, it is ultimately tethered to the rhythmic skeleton of each of these movements.

Hyphae are extremely thin filaments of fungus, often only a single cell thick, that collectively form complex networks called mycelium. Mycelium is a vital part of ecosystems and forms especially close relationships with plants. This simple filament can be framed as a symbol of healthy ecosystems. In 2019 and again in 2020 mass forest fires broke out across the Amazon, due to, in part, clear-cutting and increased volatility due to climate change. 2020 was a record-breaking wildfire season across the western United States. And on Vancouver Island, while I am writing this piece, land protectors, including the hereditary leadership from the Pacheedaht and surrounding First Nations, have come to a head with the RCMP and logging companies, for blockading the clear-cutting of old-growth forests. In this time of horrific catastrophe, I write this piece as a song for hypha, a symbol of hope for the health of Earth's ecosystems, and for humanity to find ways to live in symbiotic association with the life around us.

Arise, Kite (for Erik Satie) is based on Satie’s “Harmonies,” 3 short pieces written in 1906 as an exercise for the Schola Cantorum. In the pieces, Satie’s chords are densely voiced and are mostly written in the treble clef (with the exception of the third exercise.) I have taken each exercise and deconstructed the chords into one or two voice phrases, stretching them thinly over the keyboard. This spare texture, enhanced by copious use of pedals, plays with the natural resonance of the piano and the decay of the vibrating string. Expression markings are as follows:

II. with the wind

III. with the breath

The title is an obvious anagram of Satie’s name, which serendipitously became an apt descriptor for the music.