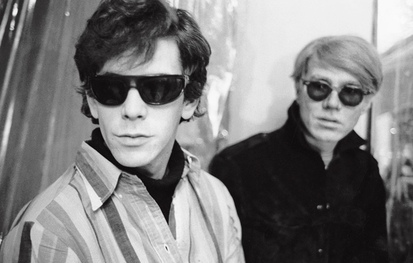 The intersection of two masters of the late 20th Century, Andy Warhol and Lou Reed, resulted in a spontaneous combustion of music, film, poetry, visual effects and underground culture that spawned generations of followers and redefined art in the modern world. Warhol called it The Exploding Plastic Inevitable.

Thomas Mulready presents a multi-media presentation featuring rare video, needle drops, trivia, contests and give-aways, followed by a live music showcase by the band Vanity Crash pairing music of The Velvet Underground with their own sizzling originals. This event takes place at 8:00PM on Friday, September 13 and Saturday, September 14, 2019 at the BOP STOP, 2920 Detroit Avenue, Cleveland, OH 44113. Note: each evening may contain slightly different material. All ages will be admitted. The show contains explicit content.

On January 13, 1966, Andy Warhol was invited to address the annual banquet of the New York Society of Clinical Psychiatry at the Delmonico Hotel in New York City. The psychiatrists expected entertainment, but were also curious about Warhol, l’enfant terrible of the art world known for his Campbell Soup Cans silkscreens, controversial films, and Chic Mystique. Instead, he brought along a coterie of his Factory superstars, a film crew and an annoyingly loud musical ensemble known as The Velvet Underground.

Andy Warhol had been looking for a rock band to manage, and when he first saw The Velvet Underground, it fired his imagination. John Cale’s droning viola betrayed his classical music training with John Cage and LaMonte Young; Moe Tucker’s primordial drumming and androgynous vibe defined the group’s feel; Sterling Morrison’s primitive guitar stylings and facility on bass and keyboards fleshed out the sound of The Velvet Underground. But it was vocalist and songwriter Lou Reed who attracted Warhol instantly with his streetwise sneer, odes to casual drug use (Heroin, I’m Waiting For The Man), sacrificial death (The Black Angel’s Death Song), sadomasochism (Venus in Furs), and his boyish downtown charm paired with a nonchalant attitude the two shared. When Warhol insisted on the addition of chanteuse and actress Nico as a lead singer for the Velvets, Reed reluctantly obliged, writing Femme Fatale, I’ll Be Your Mirror, and All Tomorrow’s Parties, Warhol’s favorite Velvets song.

Warhol “produced” the Velvet Underground’s first album, or at least he was in the vicinity while it was being recorded. Although tagged with Brian Eno’s quote that only 30,000 albums were sold (and everyone who bought one formed a band), in fact The Velvet Underground With Nico is now ranked the 13th best album of all time by Rolling Stone, and it tops Spin’s list of most influential albums of all time.

Warhol seized on the opportunity to create a traveling road show that leveraged his fame and integrated multiple media, showcasing his increasingly experimental films, dancing, poetry and mayhem, along with stroboscopes, slides and projections.

This confluence of live music, multi-media and performance art was christened The Exploding Plastic Inevitable and toured the U.S. in select cities for over a year, inciting varying degrees of confusion and hostility. “Put it down to decadent dada,” an early review sneered. But the ripples and repercussions of the EPI would be felt for decades, influencing everything from post-hippie expressionism to punk rebellion, from underground art experimentation to Cirque du Soleil and Blue Man Group, from bohemian performance poetry slams to EDM raves.

ABOUT THOMAS MULREADY: Acclaimed pop culture presenter Thomas Mulready is known for his avantgarde non-profit festivals: Ingenuity Fest, now in its 15th year, and the legendary Performance Art Festival, the largest festival of performance art ever. He created the CoolCleveland media network to turn people on to the coolness of Cleveland. Assiduously researched and painstakingly organized, Mulready has presented his performance art in Cleveland, Chicago, New York and Paris, and served as a Senior Research Consultant in the United Kingdom. His multimedia presentations on Andy Warhol, The Velvet Underground, David Bowie, Glam and The Beatles have been presented at universities, jazz clubs and aquariums.

ABOUT VANITY CRASH: Vanity Crash was born on stage under hot lights in the crucible of sound and fury as the glam-punk band The Angry Inch in the rock musical Hedwig and the Angry Inch. Ever since, Vanity Crash has been dressing up and throwing down eye-popping synchronized light shows, outrageous stage costumes and provocative attitude, opening for the likes of the New York Dolls, Poison, Semi Precious Weapons, the Darkness, and Gogol Bordello. Their recent celebrated tributes to pop culture heroes include timeless gems performed live alongside their own incendiary originals. Vanity Crash launched their 5th original release, Phantasmagoria, in 2017, including an original track featuring David Bowie's longtime pianist, Mike Garson.